Dundalk take a hammering in Cyprus to crash out of Europe 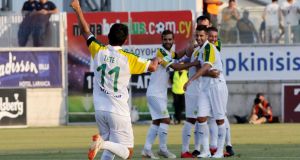 Stephen Kenny pulled no punches in assessing his side’s display after seeing them dumped out of Europe in convincing fashion by AEK Larnaca in Cyprus on Thursday night.

The Lilywhites came into the game feeling they had a chance of progression to the third qualifying round having held their opponents scoreless in the first leg but bowed out with a whimper after slumping to their heaviest ever defeat under their current manager.

The damage was done mainly in the first half when the Louth men coughed up three soft goals, two of which were converted by Ivan Trickovski.

After freezing in the searing heat, Kenny admitted his side needed to see the early pressure from the Cypriots out.

“Our defending for the goals was nowhere near good enough. They were all preventable. To concede three in the first half is hard to believe. When they scored two our heads dropped completely for a period.

“Sometimes you just need to hang in there when a team gets a run on you like that and just see the period out.

“We just had a really bad first half and got punished and it’s too late to rectify it then. We made two changes at half-time that definitely improved it. Sean Gannon and Patrick McEleney were influential in the second half but it was too big a mountain then.

“We’ve not lost like that in the past. We’ve never done that. We’re better than we played tonight,” said Kenny.

The warning signs of what was to come were there early on with Trickovski finally breaking the deadlock with his third opening of the game on 13 minutes.

After Dundalk’s first attack broke down at the other end, the home side broke upfield with Acorán slipping the Macedonian international in ahead of Sean Hoare for a cool finish past Gary Rogers to the bottom right hand corner.

Things went from bad to worse for the SSE Airtricity League Premier Division leaders when they conceded a second on 21 minutes. This time a pass from halfway by Joan Truyols played Tete in behind Hoare on the left and he made no mistake with the coolest of finishes.

The visitors were denied what looked to be a stone wall penalty on 33 minutes when Jamie McGrath went down in the box under Giannou’s challenge but all hopes of a turnaround were ended five minutes later when the Cypriots added a third.

Hoare was found out again as Tete was picked out in acres of space on the left with his cross bundled home at the second attempt by Trickovski after his initial effort was saved by Rogers.

Kenny threw on both Sean Gannon and Patrick McEleney at the break in an attempt to salvage the game but while the latter did have an early effort over, Dundalk were fortunate not to fall further behind on 51 minutes when Trickovski’s shot came back off the butt of the post after Ioannou had broke clear of Hoare on the right.

The visitors did improve slightly afterwards with Pat Hoban going close with two headers either side of a Michael Duffy shot that fizzed just wide.

Dundalk were very much second best, however, and it took a fine save from Rogers five minutes from the end to tip Trickovski’s header over the bar.

The final nail was put in their coffin on 87 minutes though when substitute Joan Tomás added a fourth with his first touch after being teed up by Apostolos Giannou.