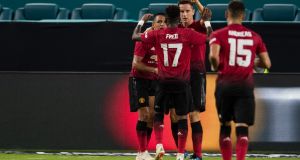 It will take much more than a pre-season win to cure José Mourinho’s ever darkening mood. Beating a Real Madrid side who have just begun their own preparations for the new campaign means little in the grand scheme of things yet for Mourinho, who made few friends and even more enemies in Spain during a typically tempestuous three-year spell, it perhaps carried a touch more significance than most of these tune-up encounters.

Excellent first half goals from Alexis Sànchez and Ander Herrera placed United firmly in control of a game they deserved to win against, it must be said, undercooked opponents who barely got out of first gear until the second half. Karim Benzema’s 45th-minute strike gave the predominantly Madrid supporting crowd of 64,14 here something to get excited about, yet it was not enough.

The Old Trafford manager would have been pleased to see Sànchez looking near to his busy, creative best while there was an assured first start for Brazilian midfielder Fred. Herrera and Juan Mata also impressed. It has, nevertheless, been an extremely long two weeks in the US for Mourinho – this was their first victory in regulation play (AC Milan were defeated on penalties in Los Angeles last week) – who has reverted to miserable type with aplomb.

“I didn’t learn anything (from this tour),” Mourinho said. “I know what Herrera, Mata and Sànchez are, I know the kids are very young and need time to grow up. The boys gave everything and we tried to fight for the best result, but tactically it means nothing.”

The Portuguese will be delighted to get back to Manchester although whether the problems which have blighted a tempestuous pre-season will be solved before the start of the Premier League season remains to be seen. The absence of Anthony Martial continues to prompt questions, and when asked again whether the Frenchman would return to join the team in Manchester, Mourinho said, “I don’t know.”

The manager’s travails, which came to the fore last weekend in Michigan with an astonishing broadside against some of his own players while privately fuming with executive vice chairman Ed Woodward’s lack of transfer activity, would certainly have raised a smile in the Real Madrid ranks. The 55 year-old never felt truly loved during a rollercoaster spell at the Bernabéu from 2010 to 2013 which saw everything unravel in true Mourinho style – falling out with almost everyone before heading for the nearest exit door with a knowing grimace.

His situation at Old Trafford is yet to reach that kind of meltdown level though new signings – a central defender and a winger are his priority – are needed to diffuse unhappiness and breed confidence ahead of what promises to be a testing campaign trying to keep free-flowing Manchester City at bay. This was United’s fifth game of this trip but for Real, a visit to Hard Rock Stadium was the first of a three-match International Champions Cup schedule which sees further encounters with Juventus and Roma.

With David de Gea making his first appearance since returning from a post-World Cup break and new signing Fred, the Brazilian midfielder who cost £52m this summer from Shakhtar Donetsk, enjoying his first start, at least Mourinho was able to see some of the 12 key first team players who have missed most of this trip return to action.

There was, of course, no Cristiano Ronaldo on show for Real following his move to Juventus, so it was left to Gareth Bale and Benzema to produce the kind of star quality an expectant crowd at the home of the Miami Dolphins came to see. The Madrid pair teamed up early on, the Welshman starting a move which saw the French striker shoot past the post from close range.

Fred acquitted himself well as United began to get a foothold in the game and on 18 minutes, Sànchez swept them ahead. It was a passage of play which could have even made Mourinho smile – Herrera sent Matteo Darmian free on the right and the Italian’s cross was steered in by the Chilean forward.

It was a superb move yet the one which followed nine minutes later, was arguably better. Darmian lifted the ball to Mata and once the Spaniard had regained his composure he crossed for Sànchez who was able to divert the ball into the path of Herrera. His finish was precise and clinical. Bale curled wide soon after yet Madrid’s attacks were so sporadic, it was a surprise to see them pull one back just moments before the end of the first half, Benzema steering in an excellent Theo Hernández cross.

Bale, a one time target for Mourinho, was withdrawn for the second half as Julen Lopetegui shuffled his pack and one of the substitutes introduced, Martin Ødegaard, should have levelled on 56 minutes when he blazed over the bar from eight yards. The young Norwegian also saw a free-kick saved by De Gea on 73 minutes but Mourinho’s side held firm. Now, however, the hard work really begins. – Guardian service