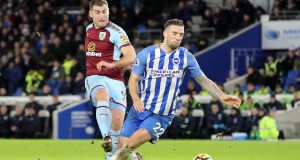 Everton (9) v Chelsea (3), 12.30pm, Live Sky Sports Premier League & Main Event
Yannick Bolasie is poised to return to the Everton squad for the first time in more than a year. Toffees boss Sam Allardyce plans to put Bolasie on the bench and hopefully give him a run-out after the winger finally recovered from his knee injury. James McCarthy and Ross Barkley are nearing comebacks and could be available in the new year.

Striker Alvaro Morata is suspended but left wing back Marcos Alonso is back from a ban when Chelsea travel to Goodison Park. Morata’s absence, for a fifth booking of the season, means Eden Hazard is likely to be deployed as a ‘false nine’ on Merseyside. Chelsea head coach Antonio Conte, who is still without Charly Musonda (groin) and David Luiz (knee), is likely to revert to his first-choice line-up after making eight changes against Bournemouth on Wednesday.

Brighton (13) v Watford (10)
Brighton will be without key defender Shane Duffy through suspension. The Republic of Ireland international serves a one-match ban after collecting a fifth booking of the season against Burnley last weekend. Striker Sam Baldock (calf) is fit, but midfielder Steve Sidwell (back) remains sidelined.

Manchester City (1) v Bournemouth (16), Live on Sky Sports Premier League
Manchester City captain Vincent Kompany will have a fitness test after the Belgium defender missed the last three games with a muscular injury. He is now back in training and is expected to return soon. The availability of playmaker David Silva, who has missed the past two games for personal reasons, is unclear but midfielder Phil Foden (ankle) and defenders Benjamin Mendy (knee) and John Stones (hamstring) are out.

Striker Jermain Defoe will be among a number of injury absentees for the trip to face the leaders. The England international is scheduled to see a specialist after limping out of the midweek Carabao Cup defeat to Chelsea with an ankle issue, while midfielder Harry Arter suffered a calf problem in that game and is unlikely to be available. Striker Callum Wilson (knee) should be fit to feature but full back Charlie Daniels (groin) and forward Joshua King (hamstring) are both doubts.

Southampton (12) v Huddersfield (11)
Southampton will be without full backs Ryan Bertrand (hamstring) and Cedric Soares (ankle). Saints manager Mauricio Pellegrino has no other selection issues but has suggested he will rotate his squad during a busy festive schedule, which could mean a recall for defender Virgil van Dijk, who was left on the bench against Chelsea last weekend.

Huddersfield forward Elias Kachunga has been ruled out for 10-12 weeks after sustaining a knee injury in last week’s win at Watford, while Jonathan Hogg serves a one-game ban following his dismissal at Vicarage Road. Defender Chris Lowe will be included in the squad despite sustaining a foot injury last week, but Michael Hefele has had a setback in his recovery from an Achilles injury. Philip Billing (ankle) and Jon Gorenc Stankovic (knee) are still out.

Stoke (17) v West Brom (19)
Stoke will be without Bruno Martins Indi (groin) once again, while fellow defenders Kurt Zouma (hamstring) and Erik Pieters are major doubts. There are also question marks over midfielder Charlie Adam, who has been nursing a hip problem. Full back Glen Johnson (knee) has been training and could be back involved. Jese Rodriguez will take some time to get back up to speed after returning to England following time in Gran Canaria with his ill son.

Nacer Chadli and Matt Phillips could return for the Baggies at the bet365 Stadium. Belgium international Chadli (hip) and Phillips (hamstring) have returned to training and are expected to be included in the travelling squad on Saturday. Craig Dawson may also return after a knee injury but James Morrison (Achilles) remains out for Alan Pardew’s side.

Swansea (20) v Crystal Palace (14)
Swansea striker Wilfried Bony will miss out due to the hamstring strain that forced him off early at Everton on Monday. Leon Britton, placed in caretaker charge following Paul Clement’s sacking, has ruled himself out of being part of the squad this weekend because of a calf strain, while Ki Sung-yeung (calf) and Leroy Fer (back) are being monitored.

Palace striker Christian Benteke is suspended and boss Roy Hodgson has confirmed that Jason Puncheon is available for selection despite being charged with possession of an offensive weapon and assault. Midfielder Luka Milivojevic returns from suspension but Joel Ward is still unavailable due to his groin problem.

West Ham (15) v Newcastle (18)
West Ham will be without Mark Noble and Michail Antonio. Skipper Noble has a slight hamstring problem and winger Antonio is sidelined by a calf injury. Manuel Lanzini is still suspended but fellow midfielder Cheikhou Kouyate returns to the squad after recovering from his hamstring injury.

Newcastle striker Aleksandar Mitrovic is out as he continues to battle a back injury. The Serbia international is likely to be sidelined for another 10 days with the problem, and he has been joined on the sidelines by full back Jesus Gamez, who has undergone ankle surgery. Midfielder Jonjo Shelvey completes a two-match ban, while manager Rafael Benitez will assess a series of knocks before he names his team.

Burnley (6) v Tottenham (7), Live BT Sport 1, 5.30pm
Burnley are without James Tarkowski after the defender was banned for three games for violent conduct. Kevin Long will step back in to deputise for Tarkowski, while both Dean Marney and Jonathan Walters are close to returning to the squad after knee injuries. Goalkeeper Tom Heaton continues to make good progress from his shoulder injury but is not expected to feature over the festive period.

Tottenham will have defender Davinson Sanchez back from a three-match suspension for their trip to Turf Moor. Defensive midfielder Victor Wanyama (knee), who has been sidelined for more than four months, has returned to training but will not be available in Lancashire.

Leicester (8) v Manchester United (2), 7.45pm, Live Sky Sports Premier League & Main Event
Wilfred Ndidi returns to contention for Leicester. The midfielder missed the Carabao Cup defeat to Manchester City in midweek as he served a one-match suspension, but he is available again and could be restored to the starting line-up by Foxes boss Claude Puel. It remains to be seen whether out-of-favour striker Islam Slimani will be involved, having been left out of the last five match-day squads.

Antonio Valencia, Marouane Fellaini and Michael Carrick remain out for United. Red Devils boss Jose Mourinho confirmed Valencia is sidelined with a hamstring injury, while appearing to rule midfielders Carrick and Fellaini out of the festive period. Centre back Eric Bailly is undergoing surgery on an ankle issue, but Paul Pogba is available for the Premier League once again having returned from his three-match domestic suspension in the Carabao Cup loss at Bristol City.