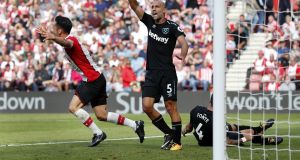 Southampton ended their goal drought at St Mary’s and increased 10-man West Ham’s misery with a 3-2 Premier League victory secured by a stoppage-time penalty from Charlie Austin. An inability to score in their past six home games had contributed to the dismissal of Claude Puel and continued in last week’s 0-0 draw with Swansea in new manager Mauricio Pellegrino’s first match in charge, despite 29 shots on goal.

In West Ham they then found accommodating opposition, whose hopes of recovering from a 4-0 defeat at Manchester United suffered when the reckless Marko Arnautovic was sent off in the first half. The club-record signing was given a red card in the 33rd minute after he appeared to elbow Jack Stephens when they already trailed to Manolo Gabbiadini’s opening goal.

Austin’s late penalty, following Dusan Tadic’s in the first half, then secured a first league victory of the season for fifth-placed Southampton, who almost drew once again after Javier Hernandez’s two goals took the visitors level.

Southampton went in front in the 11th minute Gabbiadini collected possession in midfield and found Nathan Redmond, who after delaying until the Italian’s run took him into the penalty area, returned his pass and watched his team-mate calmly finish low beyond Hart.

Former Southampton captain Jose Fonte then combined with Ogbonna to pull Steven Davis back in the area, leaving referee Lee Mason little choice but to award Southampton a 38th-minute penalty. Striking the ball down the middle, Tadic doubled their lead when the diving Hart’s foot could only deflect the ball high into his own net.

Even on the stroke of half-time, when Hernandez calmly tapped in from close range after Fraser Forster had palmed Michael Antonio’s hopeful turn and shot from the edge of the area into the striker’s path, the visitors’ situation looked bleak.

Gabbiadini had threatened to extend Southampton’s lead midway through the second half when curling against the crossbar from 30 yards, but by the 74th minute West Ham had equalised, Hernandez finding the roof of the net.

But Zabaleta then combined with Fonte in stoppage time to bring down Maya Yoshida as the defender chased James Ward-Prowse’s cross, giving Southampton another penalty and the chance to earn all three points. Like Tadic, substitute Austin powerfully struck down the middle beyond Hart, leaving the England goalkeeper’s new club bottom of the league.

Riyad Mahrez inspired Leicester to breeze past toothless Brighton as the Foxes cruised to a comfortable win. Shinji Okazaki cashed in on goalkeeper Mathew Ryan’s error after just 52 seconds to set the tone at the King Power Stadium. Harry Maguire then netted on his home debut as Craig Shakespeare’s men strolled to their first win of the season.

It was as easy as any win comes in the Premier League and carefree Mahrez led the charge as he taunted Brighton, shaking off continued transfer speculation. Roma have had three bids rejected for the Algeria international - the most recent of £32million - but there was no sulking from the winger who put on the sort of display which has made him so sought after.

He was back to the form which earned him the PFA Player of the Year award in 2016 during Leicester’s shock title success. Brighton had no answer to him, barely making a dent in Leicester’s game plan, and, despite spending around £40million this summer, looked ill-equipped to deal with the demands of the Premier League.

With former teams Norwich and Newcastle, and now Brighton, Chris Hughton has seen his sides score just 18 times in 25 games on the road in the Premier League. It had been a major problem for him in the past and there was nothing to suggest that was going to change, although it was at the back where their issues started.

It was Brighton’s first top-flight away game for 34 years, but they fell behind after just 52 seconds following a gaffe from Ryan. Mahrez tricked his way into the area and, with Brighton backing off, the Algerian curled in a shot which Ryan should have dealt with. Instead, the 25-year-old, who joined from Valencia in the summer, spilled it straight to the waiting Okazaki, who accepted the gift to tap in his second goal of the season.

The Foxes got the second their play deserved when Maguire nodded in Mahrez’s corner at the far post nine minutes after half-time, his first goal since a £17million switch from Hull. It was routine stuff from Leicester and another stark reminder to Brighton of the challenge they face to stay in the Premier League. Substitute Tomer Hemed did at least force a save from Kasper Schmeichel, his first of the match, with 18 minutes left, but Brighton had no late answers and Leicester were content with a job well done.

Second-half goals from Richarlison and substitute Etienne Capoue earned Watford a well-deserved victory at Bournemouth. Nathaniel Chalobah had wasted a series of chances for the Hornets but they were not to be denied the three points as Richarlison poked in his first goal for the club 17 minutes from time before Capoue drove in a splendid half-volley from distance late on.

The match marked Jermain Defoe’s first home game back at Bournemouth but, after coming on half an hour from time with the score level, he failed to inspire Eddie Howe’s men.

Chalobah should have put Watford in front in the 18th minute but he directed a free header wide of the left upright following Nordin Amrabat’s superb right-wing delivery. Bournemouth had another lucky escape just before the half hour mark when defender Steve Cook took out Richarlison with the Watford man racing towards goal, only to be saved by a debatable offside decision.

Bournemouth boss Howe clearly sensed his side were struggling and he threw on England striker Defoe with half an hour remaining, in place of the luckless Afobe. The substitution failed to pay dividends though and Watford’s second-half superiority was rewarded when Richarlison poked them ahead with his first goal since a summer switch from Fluminense.

Watford boss Marco Silva won his first game as Hull manager against Bournemouth and he repeated the trick here as Frenchman Capoue put the result beyond doubt. The midfielder collected the ball 25 yards from goal four minutes from time and unleashed a fantastic strike into the bottom left corner as Watford ended a run of four successive top-flight draws against the Cherries.

Substitute Hal Robson-Kanu scored to earn West Brom another 1-0 win before being sent off in a lively 20-minute cameo at Burnley. The Wales international held off two Clarets defenders to net in the 71st minute, but he was then dismissed seven minutes from time when he caught Matt Lowton in the head with his elbow as the Burnley full-back headed clear.

However, it did not cost the Baggies, again missing Manchester City target Jonny Evans, against a wasteful Clarets team who showed why Leeds striker Chris Wood’s seemingly inevitable arrival is so important.

West Brom’s style under Tony Pulis is obvious, but Sean Dyche appears keener to change Burnley’s identity this season, having added Jack Cork to a midfield five that also included Steven Defour. They enjoyed nearly 70 per cent possession here and looked far more likely to break the deadlock, with Jeff Hendrick firing a half volley narrowly wide and Johann Berg Gudmundsson curling another attempt off target from a Sam Vokes knockdown.

The contest was scoreless at half-time, as it was last season when the two met at Turf Moor in May, but there were four second-half goals on that occasion. Jake Livermore thought he had one here two minutes after the restart when his deflected effort found its way past Tom Heaton, though the flag had been already been raised because Rodriguez had strayed offside in setting up the chance.

Robbie Brady was the next Clarets player to steer an effort off target and they were soon punished for their profligacy by substitute Robson-Kanu, who put the visitors ahead eight minutes after coming on. Brunt’s clearance from the byline was nodded on by Phillips and Robson-Kanu beat Stephen Ward to the flick-on before outmuscling James Tarkowski and staying on his feet to slam his finish beyond Heaton.

Yet the striker went from hero to zero shortly afterwards as his left arm caught Lowton in the head as he struggled to make up the ground to challenge him in the air. Referee Martin Atkinson immediately brandished the red card and Robson-Kanu trudged off just 20 minutes after arriving. Burnley, who beat nine-man Chelsea last weekend, could not capitalise in the closing stages, though, as Hendrick, Sam Vokes and substitute Jonathan Walters all missed the target.