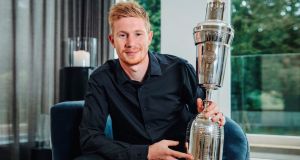 The Belgium playmaker’s award breaks a two-year run of Liverpool winners, with Virgil Van Dijk and Mohamed Salah having claimed the prize over the previous two seasons.

City trailed the Reds by an eventual 18 points in the 2019/20 Premier League term but De Bruyne, who registered 13 goals and a record-equalling 20 assists, was voted the campaign’s top performer by his peers and he was quick to thank his manager for handing him full creative licence.

“Most of the time he just lets me be me,” the 29-year-old said of Guardiola.

“We speak often about the team but in a lot of senses he knows when he gives the orders of what the team has to do that I will listen.

“But then on the other side he gives me a lot of freedom; I don’t know why, that’s just the way it goes between us.

“He knows in one way I will always put the team first and then obviously if I can help myself I’m going to do that.

“But he knows that I want the team to win, and if the team wins I will gain from it.

“So I think in that sense he feels fine and he trusts me completely.

“This is a big honour, to be voted by your colleagues, competitors from other teams who you always play against on the field. That they vote for you for best player; it’s amazing.

“It’s maybe strange that I’m the first one at City, seeing all the good players who played there before and who are still playing. But it’s nice to represent the club.”

Last term’s winner Van Dijk was shortlisted again for his exploits in Liverpool’s title-winning 2019/20 campaign, with his Reds team-mates Sadio Mane, Jordan Henderson and Trent Alexander-Arnold also in the running.

De Bruyne pipped all of those to the accolade, however, and also fought off the challenge of his City colleague Raheem Sterling.

Beth England scooped the women’s player of the year award, having helped Chelsea do the Women’s Super League and League Cup double.

Striker England scored 21 goals in all competitions for the Blues, and prevented Arsenal’s Vivianne Miedema claiming the award twice in a row.

“It’s a huge honour to be voted for by your fellow peers, so thank you to everyone who voted for me,” England said.

“The team cohesion as a group, we fought for everything we had. The girls were tremendous, thankfully we had a great year and hopefully it continues.”

The 21-year-old warned Liverpool’s rivals that German boss Klopp’s side were nowhere near satisfied with their successes to date.

“That first taste of success and being able to lift trophies, you never get over that, and the disappointments that come along the way too feed that hunger as well,” said Alexander-Arnold.

“And I think as a team and individually the mentality is to keep going and to keep striving forward, because we’re not done yet.”

City on Tuesday completed the re-signing of England defender Lucy Bronze from Lyon, and Hemp believes City is the place to be.

She said:: “At the moment I think it’s the time to be at City, and I think people from the outside are looking and saying, ‘Wow they are going to do well this season’.”