TV View: Two into one doesn’t go as thrifty Sky spread themselves too thin 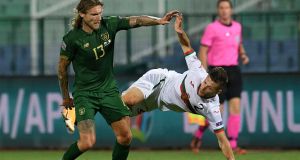 Even the mere naming of Stephen Kenny’s first team felt like the most exhilarating thing to happen in Irish football since, dunno, Italia 90, the inclusion in the starting line-up of, in particular, whippersnappers Aaron Connolly and Adam Idah confirming, lest we had any doubts, that this is indeed a very new era. And all of us, most probably, are very much ready for it.

“As Irish fans, we’ve been subjected to some real dour years of football and some right dross,” as Phil Babb put it on Sky. Harsh, perhaps, but sure look, true.

So, not even having sat through all of Latvia 0, Andorra 0, which preceded our lads’ game in Sofia, could curb that enthusiasm, even if the only highlight through the entire 97 minutes and 14.3 seconds was Vladislavs Gutkovskis being sent off for attempting to land a left hook on Moises San Nicolas which, like just about every effort on goal all evening, went wide.

Sky didn’t even apologise for covering the game, too busy were they readying themselves for coverage of Bulgaria v Republic of Ireland v Finland v Wales.

They’ve been letting a lot of their people go of late, among them Matt Le Tissier, Charlie Nicholas and Phil Thompson, but this still seemed like quite an extreme effort at thriftiness, having one presenter and panel of pundits cover two games all at the same time. Sort of like The Great British Bake Off melding with Strictly Come Dancing.

Sky Man – and apologies here, but this couch never caught his name, the cutbacks seemingly including not putting people’s names on the screen – effortlessly multi-tasked, in fairness to him. One minute he was asking James Collins what he felt about golfer Gareth Bale’s club situation, and the next he was asking Phil about Matt Dough-er-tee’s selection at right back ahead of Séamus Coleman.

Phil, who also thinks our right back is called Dough-er-tee, was grand with the selection, in fact he was very excited about it. “Dough-er-tee has earned his Spurs, hasn’t he,” said the Sky Man, everyone chuckling heartily except James whose focus was on events in Helsinki where Daniel O’Shaughnessy was starting for Finland. By now, even a teetotaller would have felt quite tipsy.

So, what about this new Irish dawn? Sky Man wondered how Phil felt about Damien Duff and Keith Andrews being included in Kenny’s backroom team. Phil doffed his cap to the Duffer, saying he’s heard great things about his coaching and communication talents. Andrews? “I think there were a few raised eyebrows . . . I mean, we’ve worked with Keith for a number of years here,” he said. “It’s a great gig for him.” A warm tribute, then.

Then it was time for a socially distanced Guy Havord chat with Kenny, just when our new gaffer thought things couldn’t get any weirder. The gist of his message was that while he appreciated our lads’ reputation for having tremendously big hearts, he’d quite like them to play some decent football too. “It’s not about winning at all costs – you have to have values, you have to stand for something,” he said. Where’s that emoji with heart-shaped eyes when you need it?

Match time and while most of us still have absolutely no clue what the Nations League actually is, and whether we are attempting to qualify for Euro 2020, 2021 or 2024, or the 2026 World Cup, all that mattered was that this was Day One in our new dawn, so we were well up for a pleasant outcome.

And who should be sitting alongside Rob Hawthorne on commentary duty only Mick McCarthy, him being highly complimentary about Kenny’s chosen XI, reckoning they’d play some tidy football on the floor. And then he spent the bulk of the game imploring them to pump in a heap of crosses in the hope that someone might get a head on one.

Injury time and Robbie Brady pumped in a corner for Shane Duffy who got his head on it. Goal. Result? Our very favourite: 1-1. And back in the studio, Phil was saluting the lads’ “work-rate and never-say-die attitude”. What’s it they say? The more things change the more they stay the same?

James, meanwhile, was still wondering how Daniel O’Shaughnessy could be playing for Finland.