Ken Early: Shane Duffy has a month to adapt to defending a high line 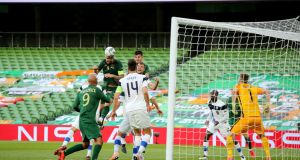 Markku Kanerva looked us straight in the eye as he slid the blade home.

“We knew the level of Ireland, they are a very physical team, strong in duels and especially at set-pieces they can cause problems . . .”

The Finland coach’s mild demeanour suggested he did not realise he was saying exactly what we didn’t want to hear. But it was unrealistic to think Stephen Kenny’s grand ambition to change the international image of Irish football could be accomplished overnight.

Kanerva was a defender in the Finland team that drew 1-1 in Dublin in Liam Brady’s last international, in May 1990; maybe he still remembers the furious aerial barrage that eventually led to Kevin Sheedy’s late equaliser that day.

Sunday was a comparatively bloodless occasion, although, as the teams warmed up in the empty stadium, the curious thing was how little the atmosphere differed from a normal game in the Aviva era. The pre-match music is played so loud that crowd noise long ago ceased to be a factor in the build-up. Only when the match actually kicked off did the absence of supporters become really noticeable.

The star of a cagey first half was the voice of Darren Randolph. No matter where the ball was on the pitch, the loudest voice was that of Ireland’s goalkeeper, who usually reserved his loudest screams for moments when the opposition was restarting play from a throw-in or goal kick. “SWITCH ON, SWITCH ON!!”

At one point in the Bulgaria game last Thursday, Randolph could be overheard micro-managing Shane Duffy after the centre-back had put the ball out of play and then picked it up. Randolph didn’t want Duffy to let Bulgaria make a quick restart. “Don’t give it back to him! Drop it, drop it!” he urged, like an unsporting manager in an under-8s game, except it was Ireland’s captain he was ordering about.

Randolph must have been issuing these instructions all his career, unheard by most onlookers and probably most of his team-mates. Now in the empty stadiums, his dictatorial instincts can flourish. At one point in the first half Finland strung together what seemed like about 150 passes, with Randolph sounding increasingly like someone having a meltdown in a zombie movie: “Check the shoulder! Keep them outside! KEEP THEM OUTSIDE! GET OUT GET OUT GET OUT!”

Randolph also produced the best individual moment of the first half, saving one-on-one from Teemu Pukki after Duffy seemed not to notice the Norwich striker ghosting in behind him. Aside from that heart-in-mouth moment, Ireland’s first half was neat and tidy and cautious and a little stiff, as though the players were still getting to know each other, which in many cases they were.

On the right, the partnership of Matt Doherty and Callum O’Dowda was not exhibiting much natural chemistry, while on the left, the ball often arrived at the feet of a stationary Enda Stevens, who had to choose between a couple of unappealing options. Aaron Connolly’s touches were mainly happening out wide, 40 yards from goal and facing back towards his own half, which would have pleased Finland. On the rare occasions Ireland got the ball to Adam Idah he was usually crowded out of it.

The eye was naturally drawn to the centre, where Kenny had replaced the entire midfield unit that had started against Bulgaria. He explained afterwards that his thinking had been influenced by considerations of fitness: two matches in four nights was too much to demand from James McCarthy, given his injury history, while Jeff Hendrick had hardly played in six months, and so on.

Harry Arter threw himself into his task as the deep-lying midfielder; if McCarthy has been accused of being passive and inert, Arter is at least a more theatrically busy presence. Jayson Molumby, playing to Arter’s right, seemed a little tense at the start but became more comfortable as the game went on, while Robbie Brady is still trying to rediscover himself after injury derailed his career.

None of Ireland’s midfielders will be pleased with their parts in Finland’s winning goal. The move started with a Finnish throw, which they had complicated with the subtle misdirection of a substitution to confuse matters. If Randolph remembered to shout “SWITCH ON!” his warning went unheeded.

That substitute, Augsburg striker Fredrik Jensen, immediately took the ball past Arter, then tried to squeeze between Molumby and Brady, who stuck his foot in but succeeded only in toeing it to Teemu Pukki. Pukki turned and played a quick pass to strand Duffy again, and Jensen arrived at the far post to bundle in the low cross with his second touch.

At the end several of Ireland’s players fell to the ground in what looked like sorrow but may simply have been exhaustion. Speaking to reporters afterwards, Duffy suggested most of the side’s problems on the day could be put down to a lack of match fitness.

Asked to analyse his own performance and the challenges of defending in this more proactive system, Duffy started to sound a touch embattled. “[The new style] is a bit different because the full backs want to play higher, so [the centre backs] are two against two a lot . . . People will say what they want about me, but I can defend in one-on-one situations, I’ve done it at international level, I’ve done it in the Premier League. I deal with big spaces, I deal with being on the ball. I like the way we’re playing, we’re controlling it much more, I’m enjoying it.”

Duffy’s stony expression undercut the positive words. Playing this high line is like walking a tightrope and three times now in two matches he’s fallen off, twice with costly consequences. But even if Kenny had another centre-back who was obviously more comfortable with this style of defending, he could hardly drop Duffy, who also happens to be his biggest goal threat. Ireland have to hope a month’s worth of training and matches will get the big man feeling more confident on the high wire.

1 Golf in Level 5 Covid restrictions: Clubs still waiting to hear if they can remain open
2 Hugo Keenan could start in changed Ireland team against Italy
3 Marcus Rashford is Man United’s hero in the Paris rain again
4 Champions League round-up: Juventus and Barcelona off to winning starts
5 Kelly and Lynch ready for Thurles showdown as if it’s their last
Real news has value SUBSCRIBE
Crossword Get access to over 6,000 interactive crosswords