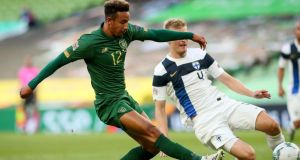 Ireland striker Callum Robinson is expected to complete a move to West Brom in the coming days. Photograph: Ryan Byrne/Inpho

Word that West Brom are expected to complete the signing of Callum Robinson on a permanent deal over the coming days will be welcomed by Stephen Kenny, with the Ireland manager set to endure the same helplessness as all of his recent predecessors starting this weekend when he looks out for starting line-ups he can do nothing whatsoever to influence.

The 48-year-old made much of the difference that match fitness will make to his side’s prospects in next month’s Euro2020 playoff semi-final in Slovakia. Tiredness certainly looked to be a factor for a number of players in what was a disappointing double header for the new manager. As he acknowledged after the Finland game on Sunday, however, he largely has to hope for the best when it comes to his key players avoiding injury and getting game time over the coming weeks.

Of the 18 players who featured in Kenny’s first two games, something like two-thirds look to be in contention to start regularly for their clubs this season.

On the goalkeeping front, Darren Randolph being installed as first-choice goalkeeper at West Ham would be helpful but Mark Travers certainly seems set to see more first-team action with Bournemouth in the Championship.

Other issues for the manager include Robbie Brady’s ability to re-establish himself as a first choice at Burnley and the continued fitness of David McGoldrick and James McCarthy with Sheffield United and Crystal Palace respectively.

Matt Doherty and Jeff Hendrick will be expected to be starters after significant moves and Shane Duffy must be a certainty at Celtic which is no bad thing . . . he looked and sounded like a man on Sunday who needs to get a few full games under his belt.

He seems set to get plenty of football at Celtic where the style of play will challenge him in a good way, even if the quality of opposition – Ross County, St Mirren and Livingston over the coming couple of weeks – will not be as stern as would have been the case had he left Brighton for the likes of West Ham or West Brom.

At the Aviva, though, he insisted that he is aware of how he needs to improve in order to play the role required of him in an evolving international back four and that he will work hard to adapt. The 28-year-old was also adamant that part of the problem over the last week was simply his lack of match sharpness and that should certainly not be such an issue by the time the Ireland squad meets up for the next time in four weeks’ time.

Apart from Robinson, whose move is expected to involve Sheffield United receiving Oliver Burke plus cash, the status of both Harry Arter and Jayson Molumby is slightly up in the air after they returned to their clubs following season-long loans.

When 30-year-old Arter left Bournemouth for Fulham last summer, the London club agreed to pay nearly €4.5 million for him now as long as he played a specified number of games. In the end, he didn’t hit the required figure and he missed their playoff success because of injury.

Fulham are still said to be keen on a deal however, and unless new Bournemouth boss Jason Tindall is especially keen to keep him then one is expected to be done.

Molumby, meanwhile, is currently on course to stay at Brighton for the season after having done well at Millwall last year. That could still change if Graham Potter decides that he is not quite ready to break into his first team and would benefit from another spell away. Things might start to become clearer on Thursday week when he would be expected to feature against Portsmouth in the Carabao Cup.

Like Travers, Adam Idah might ultimately benefit from his club’s relegation and if Kenny really sees him as having a big role to play in Ireland’s attack over the coming two months then he could do with him getting a lot more game time from the off. The 19-year-old made 12 Premier League appearances last season but only actually amassed 219 minutes of play. Manager Daniel Farke gives the very firm impression that he rates him.

In the meantime, Kenny was left with plenty to ponder by his first two games in charge. His players seem happy to embrace the new emphasis on passing and possession but there are clearly problems to be addressed, not just up front but also in midfield and defence.

An immediate improvement will be required to beat Slovakia and make the Euro2020 playoff final in November but there are also implications for the team’s seeding in November’s World Cup draw with Ireland occupying the very last spot in pot two going into last Thursday but now requiring some better results fairly urgently in order to avoid being among the third seeds.

That will wait. For now, Kenny has Saturday afternoon’s starting line-ups to worry about.

November 29th: The draw for the World Cup will be made with the seedings based on the Fifa ranking published after that month’s international games. There will be 10 groups and the winners will qualify automatically. The 10 runners up and two best-placed sides from the Nations League who have not already qualified will go into playoffs (semi-finals and finals) for three remaining places.