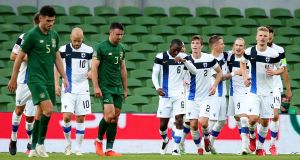 Stephen Kenny believes Ireland will be better in Bratislava than they have been this week. The new Ireland manager was by no means dejected despite a disappointing display against Finland ending in a 1-0 defeat but he made no bones about the fact that his team will have to be better next month.

Kenny said that his selections had been “experimental” in both of his first games in charge and while he accepted that the results were disappointing he has, he says, got a better sense of his options for the Euro2020 playoff next month against Slovakia.

“We don’t take these games lightly and we wanted to win,” said the Dubliner after a second half goal from Fredrik Jensen had consigned his side to defeat in an empty Aviva stadium. “We needed to look at what attacking and midfield options for Slovakia and we’ve looked at quite a few players.

“Match fitness was a factor in the two games and in a month’s time we’ll be much better,” he continued. “Players found it a tough 90 minutes as they haven’t played a league game yet. It will be a big challenge going out there but there have been some really good signs from certain players and I think we’ll be a lot better out there than we are now. We have a clear idea of what exactly we require.”

The 48 year-old made changes to just the one part of the team from the side that drew on Thursday: replacing the entire midfield that started in Bulgaria. Robbie Brady was rewarded for the impact he had made late on in Sofia while Harry Arter took over from James McCarthy in the centre and Jayson Molumby became the second player of the week to be handed his senior international debut.

Ultimately, though, it proved to be a problem area again for a team that is struggling to impose itself on opponents in anything like the way it needs to.

Ireland’s pattern of play was very much as it had been on Thursday with the locals having the better of things in terms of possession but they lacked punch up front again and looked vulnerable once more to a quick counter.

Teemu Pukki should have had the visitors in front early on but Darren Randolph saved his side on that occasion and Ireland seemed for a while to get to grips with opponents who had initially been able to exploit a lot of space out wide, especially on their right hand side.

At the break, the statistics suggested that Ireland were posing much the same level of threat as their opponents but it really didn’t feel like that with the home team’s couple of shots on target hit straight at Lukas Hradecky. Ireland might have looked at that stage as if they were starting to master how to pass the ball out from the back but the evidence very clearly suggested that there is still a good deal of work to do on what happens further forward. Their actual defending remains an issue too.

Adam Idah got a couple more opportunities here to show the pace that has helped to get him in the side but the introduction of David McGoldrick and, in particular, Callum Robinson added a bit more invention to the Irish attack and Aaron Connolly will feel he should have scored when a Robinson cross cropped nicely to him. It looked as though he thought McGoldrick was going to head it instead, however, and he couldn’t quite get his feet right to get a shot away.

By that stage, Ireland were chasing things after having conceded from a 63rd minute throw-in that would probably have come to nothing but for a couple of errors in quick succession with Brady’s the key one.

For a spell, the Irish defence was then made to look deeply uneasy by a side that seemed able to pick its way forward from midfield and into their opponents’ area time after time. Robert Taylor was the main architect of Ireland’s problems and he might have got his side’s second before Pukki went very close too with a shot from the edge of the area.

Harry Arter then did much the same at the other end as the home side pushed for an equaliser and created some chances of their own. From the Brady corner that followed, Shane Duffy came close to producing a carbon copy of the late goal that had saved his side in Sofia. This time, though, his header flew over.

“It was a better chance than the one he scored in Bulgaria,” observed Kenny afterwards. “Overall, we had three good chances and we needed to finish better than we did.”

Kenny will clearly take some time to reshape this side to the extent that he hopes to and though there have, as he is keen to point out when he has the opportunity, been positives, he would certainly have been hoping for a better start than this.