Italian terraces are once again housing a rise in fascism 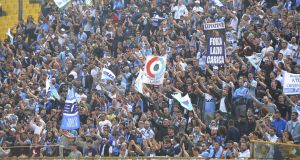 Recent weeks have shown, once again, that Italian football has a deep-seated problem with racism and fascism. At the St Stephen’s Day game at the San Siro stadium in Milan, the black Napoli defender Kalidou Koulibaly was booed for the entire match. Then, the next day, it was revealed that the fan who had died in a fight before the game between rival “ultras” (the hardcore fans) was a neo-Nazi member of a gang called Blood and Honour.

No country is free of racism – as was demonstrated by the banana skin thrown during the recent north London derby, and the reports of antisemitic chanting by Chelsea fans in December. But in Italy, the problem isn’t a result of individual idiocy, but of widespread group planning. The incidents aren’t isolated, but incessant. Anne Frank stickers are used by Lazio ultras to invoke death to their Roma rivals. “Jew” is a common taunt on stadium banners, and fascist and Nazi symbols – swastikas, celtic crosses, the Wehrmacht eagle and straight-arm salutes – appear every Sunday. Players even celebrate goals by giving the Roman salute back to their fans (Paolo Di Canio’s repeated use of the gesture was simply the most famous example of it).

That drift towards the far right has been led by the country’s ultras. Although the ultras emerged on the terraces in the late 1960s and early 1970s as apolitical groups under the leadership, often, of young teenagers, by the mid-1990s they had largely evolved into criminal gangs with neo-fascist sympathies. The ultras of Verona, Lazio and Inter led the way, but soon the terraces of all the major Italian clubs were dominated by ultras from the far right.

Fascism seemed perfectly aligned with an “ultra” form of fandom, which delighted in paramilitary uniforms and violence. The worldviews were also comparable: partisan fans have a simple, Manichean worldview of them-and-us in which hatred of outsiders is normalised. The stadium is a setting for warfare, where territory is defended and conquered. Inevitably, as happened this week, martyrs fall and – as in fascism – death is thus fetishised, almost yearned for. In that bleak world, words like “tolerance” and “multiculturalism” have absolutely no meaning.

In other countries, such extremists would comprise a tiny niche, but in Italy they’ve become mainstream for a variety of reasons. The country saw no equivalent of Germany’s denazification, and there has been a constant nostalgia for a strong-arm leader, especially given weak postwar governments. Fascist paraphernalia has always been on sale across the peninsula, and Predappio – Mussolini’s birthplace – has become a Disney-fied shrine to the Duce. Perhaps most of all, in a country in which trends are often followed slavishly, fascism has become, in recent years, decidedly fashionable: shaved heads and black shirts are de rigeur on certain terraces.

But fascism has also been assiduously rehabilitated in the last 25 years: ever since the fall of the Berlin Wall, many Italian politicians (in particular, Silvio Berlusconi and current interior minister, Matteo Salvini) have spoken admiringly of Mussolini, while depicting communists, second world war partisans and immigrants as the enemy. That rehabilitation has created an atmosphere in which intolerance thrives. The former head of the Italian Football Association Carlo Tavecchio complained about the league being swamped by players who were “banana eaters”. Holocaust memorials have been defaced. A black minister was compared to an orangutan by another politician. One journalist for the newspaper Repubblica recently compared the current climate in Italy to something from Mississippi Burning, the Alan Parker film about the Ku Klux Klan. Although that seems hyperbolic, it’s true that the number of hate crimes is exponentially on the increase. There were 557 race-related incidents in 2017.

The result is that every black footballer who plays in Italy – Lilian Thuram, Patrick Vieira, Kevin-Prince Boateng and Mario Balotelli, among others – complains about racism. Many players decide to avoid the country when deciding where to ply their trade. It’s hard to know how much that has contributed to the declining competitiveness of the Italian game, but it’s noticeable that in the last 20 years, Spanish teams have won the Champions League 11 times, Italian teams just three.

It also means that stadium attendances plummet every year as people decide it’s better to watch games on TV rather than amid the violence and hatred of the terraces. In Serie A, stadiums are less than 60 per cent full, compared to 95 per cent in England and Wales, and 91 per cent in Germany. (There are, of course, other reasons for falling attendance: crumbling, city council-owned stadia and the mind-numbing boredom of a championship won for the last seven years by the same team, Juventus).

All this comes at a time in which Serie A is desperately trying to market itself abroad. It was hoped that the purchase of Cristiano Ronaldo by Juventus would increase the global appeal of a league that was, back in the 1980s, a world-leader. But the trouble is, other powers are pulling in a different direction: just last week Salvini was photographed warmly shaking the hand of a Milan capo-ultra who has been accused of grievous bodily harm and drug-dealing. For as long as a far-right interior minister actively seeks to curry favour with far-right ultras, Italian football is likely to remain in the dark ages. – Guardian service