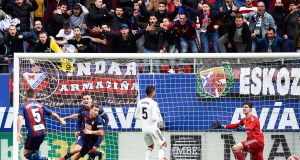 Real Madrid were plunged back into turmoil on a day when La Liga leaders Barcelona needed a last-gasp equaliser to keep Atletico Madrid off the top of the table.

Solari had won his first four matches since succeeding the sacked Julen Lopetegui – and was handed a full-time deal during the recent international break – but his first match in permanent charge proved a nightmare.

Real had never before lost to Eibar but the minnows, who climbed to eighth, stunned them at the Municipal de Ipurua with goals from Gonzalo Escalante, Sergi Enrich and Kike.

It was a scoreline that did not flatter the hosts, who hit the woodwork through Kike before taking the lead – although Real’s Gareth Bale also had a goal disallowed for offside.

Escalante was awarded the opener by VAR on 18 minutes after initially being denied by a flag having turned home on the rebound from a Kike shot parried by Thibaut Courtois.

Bale went close with a free-kick before the break but Enrich doubled Eibar’s lead after 52 minutes and Kike finished off Real five minutes later.

Barcelona, meanwhile, required an 89th-minute leveller from Ousmane Dembele to snatch a 1-1 draw at the Wanda Metropolitano and prevent Atletico Madrid taking over at the top.

Diego Costa’s 77th-minute header had looked like earning Atletico victory but a previously dull game came to life in the latter stages.

Dembele had the final word when his deflected strike found its way into the net in the last minute.

The result ensured Barca stayed ahead of Atletico at the top but Sevilla could now move above them before the end of the weekend.

Elsewhere, Santi Mina scored twice as Valencia continued their recent upturn in form with a 3-0 victory over Rayo Vallecano at the Mestalla. Mina opened the scoring after 35 minutes and added a second from a corner just after the hour before Kevin Gameiro claimed a third. The visitors had Luis Advincula dismissed for a second bookable offence three minutes from the end.

Bottom side Huesca claimed a creditable point by holding seventh-placed Levante to a 2-2 draw at the Estadio El Alcoraz.

Huesca twice led after Cristian Rivera and Xabier Etxeitia struck either side of a Roger Marti equaliser but Emmanuel Boateng brought the visitors level for a second time 16 minutes from time. Huesca finished with 10 men after Ezequiel Avila was sent off in injury time.