Man City level from behind twice against Lyon to qualify 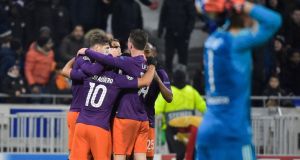 In the end this was a fine draw for Manchester City considering how Maxwel Cornet’s 81st-minute second goal appeared to have grabbed the win only for Sergio Agüero to equalise almost instantly and the bottom line is Pep Guardiola’s men are through with a game to spare.

Still, all opponents should study how Lyon took the fight to England’s champions and so came close to another victory over them in the stage. City’s paper-thin rearguard were reduced to amateur status as the forward raced in behind restore Lyon’s lead.

Lyon’s headline team news was captain, Nabil Fekir, passing a fitness test on an abductor problem so he could take his place in a frontline alongside Cornet and Memphis Depay.

After a pre-game light and laser show that had the Groupama reverberating to rock music, City’s bid for victory began with them having to defend a Depay corner from the left. The ball came into Cornet and the visitors shook for a moment before scrambling away.

This was precisely the start Lyon wished for and had the home fans raising the roof.

Next up Ayemric Laporte was lucky Gianluca Rocchi did not book him when the referee awarded a free-kick for a clumsy foul. Fekir, though, disappointed by spearing the effort straight at City’s wall.

To the question of who would fill the central role vacated by the injured Gundogan and Bernardo Silva Guardiola came up with an interesting answer. Instead of starting 18-year-old Phil Foden or the experienced Delph in the berth the manager asked Raheem Sterling to operate there.

Lyon handed City their sole defeat this season in September’s reverse game and they were showing why. Theirs was a fast and slick attack that could do to Guardiola’s men what they love doing to opponents.

A prime illustration came when Cornet found an unmarked Depay with the goal gaping but he mishit terribly. City served their own warning via a move that featured David Silva driving at Lyon and swapping passes with Sergio Agüero to come close to skipping in behind - but the latter’s touch was too heavy.

Leroy Sané twice gave possession away needlessly in front of Guardiola in another sign the City machine was yet to find smooth gear. After Fernandinho was booked for upending Depay Guardiola’s men did pin Lyon back for passage but, then, they should have conceded.

The lightning Ferland Mendy outstripped Kyle Walker and pinged a cross over from the left. Cornet dawdled yet still had time to beat Ederson yet Laporte somehow intervened and City escaped.

Cornet roved in along the right corridor and exposed City yet again and Walker was relieved to chest the ball to the safety of Ederson. By half-time this had been an entertaining, open affair, in which City had hardly threatened Anthony Lopes’s goal.

When the whistle finally blew City were relieved to still have parity. By this stage the latter’s shape was a more fluid three-centre-back one with Zinchenko in midfield when in possession.

Yet the same disconnect hampered them when moving forward as the usually sublime Silva hit a pass awry when Agüero would have been in. So desperate were they to pose Lopes some kind of problem that Sterling resorted to a speculative long shot and this went wide.

Even when winning a rare corner Sané’s short stab to Silva ended in the latter ceding the ball and Lyon breaking. The next time Bruno Genesio’s outfit moved forward they undid City with ease.

Depay collected along the left and looked up and found the right ball in. This came to Cornet and after a moment to steady himself he beat Ederson with a sweet 20-yard shot.

This had been coming all evening. City’s response came instantly as Lopes beat Agüero’s attempt out and Sané got in behind but no teammate could get on the end of his cross from the left.

All of this had Guardiola pacing his area and he was about to turn in jubilation. Sterling hit a skimming free-kick over from the right and this time Lyon were slumbering and Laporte equalised with a header.

Each side might have claimed the win in what was a frantic finish. Now all that remains is which of these two sides tops the group standings – with City needing only a point to be sure of this.