Sarri put Kante in his place after Spurs defeat 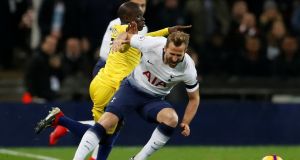 Maurizio Sarri held individual post-mortems with his Chelsea players following the loss to Tottenham and N’Golo Kante has been ordered not to deviate from his defined role on the right of midfield.

Spurs won 3-1 at Wembley to end Sarri’s 18-game unbeaten start to competitive action with the Blues and the Italian wants to see a reaction after rebuking France World Cup winner Kante for roaming too much.

Kante won two Premier League titles, with Leicester and Chelsea, playing in central midfield, but has been deployed out of position on the right to accommodate Italy playmaker Jorginho in Sarri’s chosen style.

The 27-year-old signed a new five-year contract just last week and was Professional Footballers’ Association and Football Writers’ Association Player of the Year in 2017.

Speaking ahead of Thursday’s Europa League Group L clash with Greece’s PAOK, Sarri said: “I want to play as a centre midfielder with a very technical player. For me the centre midfielder is Jorginho or (Cesc) Fabregas.

“I don’t want Kante in this position. Kante in the last match wanted to solve the match after the first 15 minutes, but in the wrong way.

“He lost the position, he attacked too much the other box. And I think this one is not one of the best characteristics of Kante. It was only a reaction to the difficulties.”

Sarri has encouraged Kante to get forward in matches and his latest comments may appear to be a contradiction. But Sarri explained there is a time and place for Kante to attack.

Sarri described Chelsea’s performance against Spurs as “a match without determination”.

He wants to see an immediate reaction to the defeat, against PAOK and in Sunday’s Premier League clash with Fulham, after discussing the Spurs performance with his players. The Blues are already through to the Europa League last 32 and need a point to win Group L with one match to go.

“I have a meeting of five or 10 minutes with the individuals, individual meetings with the players,” he added. “The targets are very clear in my mind: in the short period, to win something. And in the long period, to become the best team in Europe.

“I want to see we learned our lessons.”

1 Ken Early: Handball ‘crisis’ a timely distraction from the grim bigger picture
2 The Offload: Springbok heavyweights heading for Pro14
3 All in the Game: No sympathy from Bruno Fernandes
4 Arctic conditions in Ballymena and snowflakes in Paris
5 Malachy Clerkin: Nothing compares to rich tapestry of sound offered up by GAA match
Real news has value SUBSCRIBE