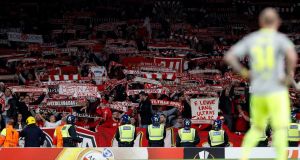 Cologne’s supporters raise their scarves in the crowd during the Europa League Group match against Arsenal at the Emirates Stadium in London. Photograph: Adrian Dennis/AFP/Getty Images

Thousands of Cologne supporters bought tickets for the Europa League game against Arsenal from club members and ticketing websites, fuelling chaotic scenes at the Emirates stadium.

Resale of football tickets is illegal in the UK, but Cologne fans told the Guardian they were able to secure seats in the home end via Craigslist, independent ticket touts and websites such as Viagogo and Ticketbis, owned by StubHub.

One Cologne fan, who asked not to be named, said he bought his tickets via Craigslist from somebody who had several seats to sell. “I got a phone number and messaged with that guy via WhatsApp,” he said. “It was £100 for a seat near the away block of the Cologne supporters.

“He sent me my ticket as a PDF via email and I paid him via PayPal. I also gave out his number to a couple of fans who were looking for tickets as well so I guess he had plenty to sell.”

He added that friends had picked up tickets bearing the names of Arsenal members in the reception of the Thistle hotel in Kensington Gardens. “These were real plastic permanent tickets with a name on them. They made the deal via Craigslist, paid upfront and had the tickets sent to their hotel in London. After the game, they had to return the permanent tickets to the hotel reception,” he said.

Adverts offering tickets for the game were still up on Craigslist the day after the game, some including telephone numbers, seat information and details of where to meet the seller.

Another Cologne fan told Guardian that he bought his ticket from a man in the Little Wonder Cafe, opposite the south west corner of the Emirates Stadium. “There were two old men at the table. I bought from a guy named Herbie, he had five or six tickets alone,” the fan said.

Screenshots taken from the Viagogo and Ticketbis websites suggest that the ticket platforms were also offering seats, despite laws preventing football ticket resale. A cached version of the Viagogo website showed the game as having sold out.

Viagogo, which has an office in London’s Fenchurch Street, declined to comment.

Spain-based Ticketbis, owned by online auction firm eBay via its tickets subsidiary StubHub, said: “We take fan segregation seriously. We make it clear to buyers using our website that visiting fans must only purchase tickets for and be seated in the designated area for visiting fans and that access to the stadium may be denied by the club where a visiting fan attempts to enter the home fan section of the stadium.”

Independent tout websites also appear to have sold hundreds of tickets. One Madrid-based site, footballticketnet.com, boasted that it sold 416 tickets for the game. The website, which did not return a request for comment, claims that it is a member of the ticket touts’ trade body, the Association of Secondary Ticketing Agents (Asta).

But a spokesperson for Asta said the site’s membership lapsed four years ago and that Asta members would not resell football tickets unless authorised by a football club.

Ticketing expert Reg Walker, of Iridium Security, said there had been a “monumental intelligence failure” on the part of police for failing to realise so many Cologne fans would be able to get their hands on tickets.

Walker said the chaotic scenes at the Emirates, which saw some Cologne fans barred from entry while others had seats in the Arsenal supporters’ sections, were the “direct result of touts reselling tickets”.

“It brings home why we have this legislation” he said. “Clearly ticket touting is rife around that stadium and it’s not being addressed as a priority.”

One forum member said: “For months, everyone in Cologne has talked of nothing else but playing in the Europa League, getting tickets, buying flights and celebrating this historic day. But then the Arsenal corporate office was so unprepared? What sort of amateurs work there?”