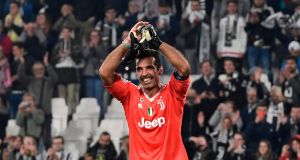 Italy goalkeeper Gianluigi Buffon has said he will retire after the World Cup — unless he can help club side Juventus win the Champions League this season.

The 39-year-old World Cup winner, who on Monday was named goalkeeper of the year at the Fifa Best awards, has never lifted European football’s top prize in a trophy-laden career.

And only the prospect of winning the competition this season and qualifying for next year’s Club World Cup would prevent him calling it a day in 2018.

“This is my last season and I am quite convinced of the choices I take,” he told Sky Italia.

“I am a very calm person, in the sense that I am not afraid of the future and of what my life may be.

“It would not change anything to play for one or two more years. It would take nothing or add anything to what I have already done.

“The only way would be to win the Champions League and, at that point, to try to win the Intercontinental. Maybe (Wojciech) Szczesny could play a game and me another.

“But I think with a goalkeeper like him, it is normal that next year I’ll be aside.”

Buffon has won eight Serie A titles, Serie B once, the Coppa Italia four times and the Uefa Cup, but has been on the losing side in three Champions League finals. He was a member of Italy’s 2006 World Cup-winning squad.