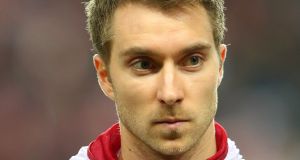 Christian Eriksen: “You have to get close enough to him so that he’s not running the show,” says Martin O’Neill. Photograph: Alex Livesey/Getty Images

In the week or Martin O’Neill has had to familiarise himself with Ireland’s World Cup play-off opponents, he has been impressed by the extent to which Denmark have improved over the course of the current campaign. In particular, he has been impressed with the performances of their stand-out midfielder and top scorer, Christian Eriksen.

“They’re pretty strong and definitely much-improved from the two-legged play-off game against Sweden two years ago,” says the Derry man. “I know perhaps the difference between the two sides at that time was probably [Zlatan] Ibrahimovic. But Eriksen is playing superbly at the moment, the boy [Thomas] Delaney is a very, very good player and they look stronger physically than they did two years ago.”

His opposite number, Åge Hareide, once both a tenant and teammate of O’Neill’s during their days together at Norwich City, has changed the way the Danes play over the course of this campaign with good results, but O’Neill believes the form of the Tottenham midfielder has been a key part of his old friend’s success.

“I think Eriksen has become as important to Denmark as Gareth Bale is to Wales,” he says. “My own view is that if you are talking about Messi and Ronaldo being the two outstanding players in the world, then Bale is in that little group behind them that includes Hazard, Suarez, Neymar, all of those players. Eriksen, in his last year, both for club and country, has put himself into that sort of category. I can’t pay him a much higher compliment.”

Asked how he will look to counter or contain the threat posed by the 25-year-old, O’Neill says it is a major concern but suggests that a key element will be to ensure the Dane is operating as far away from the Irish area as possible.

“I think first of all you have to get close enough to him so that he’s not running the show and he’s not running the show from very difficult positions for us,” he says. “If we can get to the stage in either of the matches where he has to go further back to retrieve the ball, then the further back he is the better for us. But I think – I’ve often thought this before with regard to man-marking a top quality player – these players do extricate themselves from difficult positions … That’s what makes them so good. It’s a difficulty but we have to deal with it.”

He will, at least, have plenty of opportunity to do the homework required to fine-tune his game plan between now and the first of the two games, in Copenhagen on November 11th, although there will be little enough time to familiarise his players with the finer detail.

“For a start, as opposed to maybe 20 odd years ago, you can get the games at your fingertips. We’ve watched the matches. It would be nice to see the likes of Eriksen live and I’d have a think about that, I must admit, but I’ve seen enough of him and maybe one or two of the other players who are playing for big clubs abroad.

“I’d like to see as much as I can myself but I’ve a good trust in Roy and the two Steves [Walford and Guppy], and Seamus will give us as much information about Schmeichel as he can.

“I think that I can get the information and then it’s about imparting some of that to the players during the course of the week.

“Most players are concentrating on their own club things, even though the excitement is in the back of their minds about the play-offs. I think the important thing here is that there’s no point in me having all of this knowledge if we can’t impart some of it to the players.”