Liverpool’s sloppiness against Arsenal will give rivals hope

While a 5-1 victory looked impressive, how good, really, were Jürgen Klopp’s side? 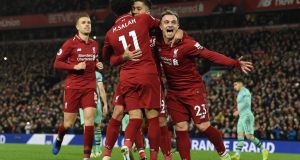 There was a moment just before half-time on Saturday, with Liverpool 3-1 up, when Jürgen Klopp strode to the edge of the technical area, eyes flashing behind his glasses, finger jabbing, fury written across his face. Sadio Mané had given the ball away cheaply and had failed to track back and Arsenal had briefly threatened. A couple of minutes later, Mohamed Salah was bundled over by Sokratis Papastathopoulos, converting the resultant penalty and Liverpool were 4-1 up. It was one of those days: however sloppy Liverpool were at times, Arsenal were much, much worse.

In the other technical area, a grimacing Unai Emery looked even more like Alan Partridge than ever, as though trying to give a speech to the sales conference of a firm specialising in coal-effect fires after piercing his foot on a spike. By midway through the first half, he had given up his guiding role on the touchline to sit on the bench: there is, in the end, only so much you can do with those players. The impact Emery has made at Arsenal, the change in style and focus, has been remarkable but sometimes the scorpion is going to sting the frog, however self-defeating it may be, because that is what a scorpion does.

Last season, Arsenal were rabbits-in-the-headlights dreadful in losing 4-0 at Anfield. Saturday was nowhere near as bad. There was at least some fight, some resistance, a plan revolving around a tactical switch to 4-2-3-1 and an attempt to get in behind the Liverpool full-backs, who seem to be becoming more adventurous by the week.

And briefly, it worked, until the defensive inadequacy took over: a lack of decisiveness leading to a series of unfortunate ricochets; a pair of challenges, that were somehow both intemperate and ineffectual, that Roberto Firmino tiptoed between; a lack of alertness after a corner had been half-cleared, first as Andy Robertson returned the ball towards Salah and then as he played it across goal; two penalties needlessly and clumsily conceded.

The image of Lucas Torreira sprawled on his face, desperately swimming across the turf, still believing he might somehow be able to effect a block as Firmino lined up his finish for the second, summed it up. It had been Torreira, given an awful pass in an awful situation, who had lost possession to initiate the attack, but he was still straining everything to get back, let down by two central defenders whose idea of stopping a rampaging forward was to wag a meek foot in his general direction. Injuries robbed Emery of Héctor Bellerín, Rob Holding and Nacho Monreal and meant Laurent Koscielny started on the bench, but a new central defence must be a priority whenever next there is money to spend.

And what of Liverpool, extending their lead at the top of the table? There was talk of a statement win, which is true but only if the statement is: “Arsenal are prone to bouts of debilitating self-destructiveness”. Few teams who win 5-1 can ever be said to have played badly but how good, really, were they? They were too quick and too aggressive for Arsenal, they ripped through them again and again, but this was at times a strangely ragged performance.

In the first 50 minutes, Liverpool lost possession 20 times – and that despite having less than 50 per cent possession (as well, of course, as being a contributory factor in them having less than half the ball). Things improved once Jordan Henderson had come on but in that spell they were losing the ball once for every 16.4 passes attempted.

There are numerous factors to be taken into account but as a rough contrast, Manchester City have lost the ball once every 28.1 passes over the course of the season.

Liverpool have not been as gung-ho this campaign. Their average is 24.4 passes per loss of possession. But against Arsenal, at least early on, was a reversion to the old Liverpool. Perhaps that was part of a conscious ploy. Perhaps Klopp realised this Arsenal can be intimidated and so set his full-backs to storm forward, encouraging a ferocious press. Control can at times consist of letting slip the leash.

But Pep Guardiola, you suspect, would not have been awed. No manager has a better record against Guardiola than Klopp, proof his cohorts of chaos can unsettle Guardiola’s order and organisation, but what has made Liverpool particularly impressive this season has been the step back into a more controlled style, as evidenced by the remarkable defensive record of eight goals conceded in 20 league games.

Impressive as the scoreline appears, impressive as Liverpool’s character was in hitting back from conceding an early goal, there was a raggedness to the performance against Arsenal and that perhaps, represents an opportunity for City on Thursday. Then again, when the forward line are playing with such abandon and wreaking such havoc, maybe it makes no sense for Klopp to try to get them back in harness. – Guardian service