Liverpool on verge of top four after West Ham capitulation 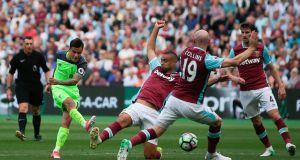 It was an afternoon when just about everything went right for Liverpool, who now know that they will return to the Champions League next season if they can beat Middlesbrough at Anfield in seven days’ time. The equation is that simple for Jürgen Klopp and his players after this emphatic victory over an abject West Ham United side, and it is hard to see Liverpool passing up the opportunity of a top-four finish on the evidence of this performance.

Philippe Coutinho was outstanding, scoring twice after setting up the first for Daniel Sturridge, who was making his first Premier League start since 2 January, and Divock Origi completed the rout with Liverpool’s fourth. That was the cue for many home supporters to leave their seats, with nearly a quarter of an hour remaining, and it was tempting to wonder what the ramifications of this woeful defeat could be for Slaven Bilic, the West Ham manager.

As well as Liverpool played – and they were in total control pretty much throughout – West Ham were dreadful, with their afternoon summed up by the moment when Andre Ayew filed a contender for miss of the season, just before half-time. Most of the action, however, took place at the other end of the pitch as Liverpool, inspired by Coutinho, wreaked havoc.

This was supposed to be a tense occasion for Liverpool, a test of their mental strength as much as anything on the back of Arsenal’s win at Stoke, which cranked up the pressure. West Ham had proved with their victory over Tottenham Hotspur, in their previous match, that they can be awkward opponents when they are in the mood, yet Liverpool seized the initiative with a goal of the highest quality from Sturridge and never looked back.

Coutinho, playing in a slightly more withdrawn role, was the creator with a wonderful pass. Nathaniel Clyne, breaking on the right, seemed the obvious option when Coutinho picked up possession but the Brazilian had other ideas and spotted Sturridge’s intelligent run through the middle. The through ball was weighted to perfection and allowed Sturridge, played onside by Sam Byram, to scamper clear. Bearing down on the West Ham goal, Sturridge was a picture of composure as he skipped around Adrian before rolling the ball into an empty net.

Up until that point Liverpool had dominated possession but not caused West Ham too many problems from open play. Sturridge hit the side-netting and James Milner ought to have done better with a shot that he dragged well wide, but the visitors’ best chance in the opening half an hour fell to Joel Matip, whose downward header from Coutinho’s corner thudded into the ground with such force that it bounced back up and hit the crossbar.

West Ham, who started with a three-man central defence, offered little other than a few nice touches from Manuel Lanzini and it was his corner that should have led to an equaliser just before half-time. The ball ran through to the far post where Ayew, totally unmarked three yards out, had an open goal. Somehow he managed to hit the post. Incredibly, Ayew, while lying on the floor, managed to do the same with the rebound, which struck the upright before Simon Mignolet smothered the ball on his goalline.

It felt like a hugely significant moment at the time and even more so once the second half got underway. Liverpool, attacking with pace, conviction and belief, sensed blood as they tore at the West Ham defence. Origi, Adam Lallana and Georgino Wijnaldum all forced saves from Adrian within a couple of minutes of the restart.

In that sense it was no surprise when Liverpool doubled their lead shortly before the hour mark. Wijnaldum’s 25-yard volley rattled the crossbar and it was a poor header from Winston Reid that landed at the feet of Coutinho, who carried the ball forward before drilling a right-footed shot into the bottom corner.

Four minutes later the game was over as a contest when Liverpool scored a third. It was a controversial goal that had West Ham bitterly complaining afterwards, with Bilic and his players adamant that they should have had a penalty at the other end when Wijnaldum’s flailing arm made contact with the ball and caught Reid in the face.

Neil Swarbrick, however, waved play on and in the blink of an eye the ball was in the back of the net, with Coutinho starting and finishing a move that exposed some abysmal West Ham defending, not least the last challenge from James Collins. Dancing around the West Ham centre-half as if he was not there, Coutinho thrashed home from 10 yards and Liverpool were rampant. Origi, after hitting the bar, then slid in a fourth.