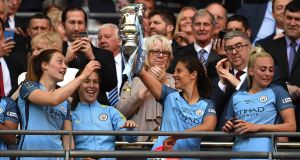 Republic of Ireland international Megan Campbell supplied two assists as Manchester City Women swept aside Birmingham City Ladies 4-1 in the SSE Women’s FA Cup final at Wembley in front of a crowd of 35,271 .

Almost five years on from netting a double in the London 2012 Olympic final at Wembley, where the United States were 2-1 winners over Japan, the reigning Fifa world player of the year was back in the goals at the stadium.

Their goals came from Lucy Bronze, who was outstanding at right back, young midfielder Izzy Christiansen, Lloyd and Jill Scott, with the reply from Birmingham coming from Charlie Wellings.

Nikita Parris and Campbell threatened early on as Nick Cushing’s side applied immediate pressure on Birmingham, and the opening goal that had been coming arrived in the 18th minute.

Bronze got it, diving in boldly to head home Campbell’s inswinging free-kick, which was delivered with pace to the edge of the six-yard box from just inside the right touchline.

The England full back was at the heart of the second Manchester City goal in the 25th minute too, breaking up a Birmingham attack and making ground down the right with the poise of a winger, before her cross found Christiansen who rifled home a powerful half-volley.

Lloyd was being overshadowed, a rare occurrence on the big stage, but that did not last long.

She almost teed up a third goal for Melissa Lawley on the half-hour. Lawley, tearing in from the left, was denied by a fine stop from Ann-Katrin Berger.

And then Lloyd had her moment in the 32nd minute, rising above team-mate and captain Steph Houghton at the far post to head in another Campbell cross, this one from the left and curling away from Berger’s reach – just perfect for the American who connected well and sprinted away in delight.

Her three-month stint with City is almost up, but this match provided the 34-year-old with memories to last a lifetime.

Parris threatened after the break when a winding run from the winger finished in a shot that was blocked behind for a corner. Berger then did well to deny Parris who threatened again to pile on the pain for Birmingham.

At the other end, Ellen White belatedly tested Karen Bardsley in the Manchester City goal, but the striker’s 25-yard shot lacked the zip required.

Houghton sent a free-kick high over the bar and a header well wide, before Birmingham grabbed a 73rd-minute lifeline when substitute Wellings unleashed a powerful left-footed strike that darted out of Bardsley’s reach.

The three-goal margin was soon restored though, Scott driving into the top left corner from 15 yards. There could have been more goals in the closing stages but Manchester City had already done more than enough.