Crystal Palace send Hull City back to the Championship 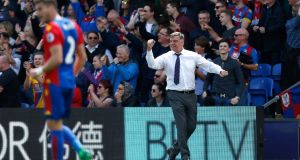 In the end, hoisting Hull City clear of trouble proved beyond even Marco Silva. The Portuguese had arguably performed a minor miracle in stretching this team’s top-flight aspirations even into the penultimate weekend, with players sold in January and a state in inertia in the boardroom. Yet, in succumbing here, the worst was confirmed. There was relief to be had from south Wales to south London, but only numbed disappointment back on Humberside. The Championship awaits.

Keeping hold of Silva may prove one of City’s trickier tasks this summer, such has been the favourable impression he has made since taking up the reins in January. Southampton have been mentioned as potential suitors should they dispense with Claude Puel’s services, but plenty now covet the 39-year-old. The away support bellowed his name through most of the second half as his team desperately tried to retrieve a two-goal deficit. They would ship two more in the latter stages once the game was up though, even then, their fans would not be silenced.

By then the locals were rejoicing, their tension lanced. Palace, with a final-day trip to Old Trafford to come, had careered into this fixture patched up and fretting about their own future, but those fears were allayed in fine fashion. “Because of the run-in, the size of the teams we had to play, this was the hardest,” said Sam Allardyce, who has performed similar acts of escapism from Bolton to Sunderland. “We’ve now not wasted the magnificent results we achieved. If you see what Arsenal have done since we beat them 3-0, it shows what we achieved. Now, in the last home game, what a way to finish in front of your own fans. It’s a great, great feeling.”

So much had appeared to hinge on early impetus. Palace had not scored the first goal in a game since they thrashed Arsenal here last month, but they were gifted their opening reward here by an improbable source. Andrea Ranocchia is an experienced centre-half who boasts 21 caps for Italy and has excelled at Internazionale so, in truth, the 29-year-old was the last member of the visitors’ back-line who might be expected to crack. Yet, 133 seconds in, there he was swinging a right boot wildly, under no discernible pressure, at Michael Dawson’s headed pass and only managing to air-kick. Wilfried Zaha, bursting forwards at the Italian’s back, converted confidently through Eldin Jakupovic and the game of catch-up had begun.

There were times when it threatened to yield a response. The visitors monopolised possession for long periods, camping themselves deep in enemy territory, and might have earned a penalty had the officials spotted Jason Puncheon’s handball. Yet it was Palace who were the more ruthless, especially with Hull so slapdash at set-pieces.

James Tomkins, who had barely kicked a ball for three weeks since sustaining an ankle injury at Anfield, should probably have converted Puncheon’s corner 10 minutes in only to plant a free header wide of the far post. Yet lessons were not learned. Just after the half-hour mark, Christian Benteke was permitted a free run into space to thump in a 15th league goal of the season from Puncheon’s latest delivery. The lack of any semblance of marking was disturbing.

Silva had to go for broke thereafter, switching personnel and his side’s shape at the interval only to lose Harry Maguire to an ankle injury in virtually the first exchange of the second period. Shaun Maloney and Kamil Grosicki scuttled at tiring defenders, City constantly pressing with Palace utterly incapable of retaining the ball. Joel Ward did well to nod Grosicki’s cross away, and block the excellent Sam Clucas’s volley at the far post as City pushed for their lifeline. Yet the more desperate they became, craving to expose Palace’s anxiety with a goal, the more often the home side sprang upfield on the counterattack.

Benteke volleyed one opportunity wide, the live-wire Zaha having torn into space, and repeated the trick from the other side when James McArthur picked him out. Eventually the forward slipped Jeffrey Schlupp into the penalty area with Dawson’s lunge sending him sprawling. Luka Milivojevic, such a key addition in January, duly slid in the resultant penalty – the 13th Hull have conceded this term – and Palace’s fifth successive campaign in the top flight was guaranteed. Patrick van Aanholt’s fourth, slid home in stoppage time, merely added gloss though, even then, the travelling support remained defiant.

1 Shock at golf clubs as sport faces shutdown in Level 5
2 Fresh faces and renewed appetite: Is this a new era for Irish rugby?
3 Colin Byrne: Hard to understand how golf has become the bogey man now
4 Level 5 golf shutdown: Ireland one of few countries to close courses
5 Andrew Porter fronting up to responsibility of starting Ireland role
Real news has value SUBSCRIBE