Yorkshire’s Wembley representative will be decided at Hillsborough on Wednesday 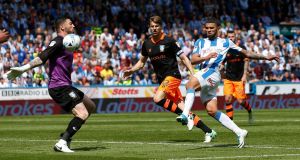 Huddersfield Town and Sheffield Wednesday finished the Championship’s regular season level on points and they remain deadlocked after a gruelling first leg of their play-off semi-final.

A full house gathered at the John Smith’s Stadium but the contest was far from action-packed. The best thing that could be said about this match was that it unfolded in a way that means the sequel at Hillsborough has to be more eventful. At the final whistle here Wednesday seemed the happier about that.

Kick-off here came 17 years to the day since Wednesday last played in the top flight and just over two years since the club were bought by the Thai businessman Dejphon Chansiri, who vowed when taking over that he would restore the Owls to their Premier League perch by 2017. Meeting that target would require finding a way past Yorkshire rivals who have been dreaming for far longer of a return to the big time, Huddersfield having dropped out of the top flight in 1972.

Chansiri stood pitchside throughout the warmup, nattering with the manager Carlos Carvalhal, who had guided Wednesday to the play-off final last season before being beaten by Hull City – who, as it turned out, failed to justify their promotion. Carvalhal’s plan for steering Wednesday back to Wembley quickly became clear here, as his team’s deep and diligent defending suggested they would be happy to leave here with a draw.

Huddersfield’s task was to find enough inventiveness to thwart the visitors’ smothering tactics. They failed.

They did, at least, set about the challenge with gusto, if not brio. They created an opening in the seventh minute after first Chris Löwe and then Elias Kachunga won balls that they seemed unlikely to reach. Kachunga then laid a pass back to Aaron Mooy, who drilled a shot wide from the edge of the area. After that, however, Huddersfield’s attacks continually foundered on Wednesday’s defence.

But in the 22nd minute a rare lapse presented a chance to Izzy Brown. Glenn Loovens swiped at thin air as he tried to clear a hopeful backheader by Nakho Wells and the ball ran unexpectedly to Brown. The midfielder was off-balance as he shot from eight yards and, to Loovens relief, the ball skimmed the top of the crossbar.

Huddersfield did not get another clear sight of goal until Wednesday embarked on a rare venture forward and Jack Hunt lost possession. That left the visitors short at the back for once. Huddersfield sprung forward swiftly and Brown played in Kachunga, who might have opened the scoring if over-eagerness had not caused him to break the offside law.

It was nervy contest. Although Huddersfield were dominating possession they still worried about the lurking threat posed by Fernando Forestieri, who had scored in each of this three previous matches against them. Tommy Smith’s fear of the striker induced extreme rashness midway through the first half when the full-back was booked for chopping down Forestieri deep in the Wednesday half.

Wednesday nearly sickened their hosts with a surprise counter-attack just before the break, but Hunt miscontrolled after being put through superbly by Barry Bannan.

Huddersfield continued to hog possession in the second half but Wednesday continued to resist strongly. It was not until the 56th minute that Huddersfield forced the visiting goalkeeper, Kieran Westwood, to make a safe, the Irish international pushing an elegant 20-yard chip by Wells over the bar.

As Huddersfield’s yearning for a goal grew, Smith joined in the attacking and might have scored in the 70th minute if not for a last-ditch challenge by Daniel Pudil. Two minutes later Huddersfield created their best chance so far, albeit with the aid of a ricochet off Hunt after Van La Parra’s burst into the box was halted. Westwood sprang off his line to block Wells’s close-range shot. That, as it turned out, was as close as Huddersfield got.