Safety in sight for Swansea City after win at Sunderland 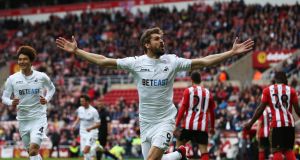 Fernando Llorente scored Swansea’s opener in their 2-0 win at the Stadium of Light. Photograph: Jan Kruger/Getty

Naughton’s piledriver in first-half injury time coupled with Fernando Llorente’s early header eased the Welsh club to a 2-0 victory and four points clear of Hull with a better goal difference.

And Paul Clement’s men will stay up if the Tigers lose at Crystal Palace on Sunday.

They have taken 10 points from the last 12 available just when they needed it most, in stark contrast to the Black Cats, whose win at the KCOM Stadium last weekend proved to be yet another false dawn, and manager David Moyes was subjected to sustained calls for his head with owner Ellis Short watching from the stands.

On a day when five-year-old Bradley Lowery and his fight against rare cancer neuroblastoma took centre-stage at the Stadium of Light, a banner reading “There’s only one Bradley Lowery” was unfurled in the South Stand as the clock ticked past the five-minute mark and a plane carrying the message “United by cancer, divided by leagues” which had been arranged by some Newcastle fans — much to the distaste of many others — flew overhead.

On the pitch, it was Swansea, backed by a travelling support of around 3,000 whose tickets had been paid for by the players, who arrived with everything to play for and they had the game won by half-time.

The Black Cats could not even raise a whimper as they fell behind with just nine minute gone when goalkeeper Jordan Pickford uncharacteristically misjudged Gylfi Sigurdsson’s free-kick and Llorente squeezed between John O’Shea and Jason Denayer to head home.

Moyes has predicted a summer of upheaval on Wearside, with leading scorer Jermain Defoe almost certain to go courtesy of a release clause in his contract, Pickford attracting interest from elsewhere and a series of out-of-contract players and loanees preparing to pack their bags. And some of them appeared to have done so already.

Their response was tepid to say the least and 35 minutes had lapsed by the time Defoe ran on to Billy Jones’ knock-down and stabbed a shot towards goal, which Swans keeper Lukasz Fabianski managed to block and then smuggle away.

But they succumbed once again deep into first-half stoppage time when, after Jordan Ayew had tormented the home defence on the left, Leon Britton and Ki Sung-yueng switched possession to the right for full-back Naughton to smash a rising right-foot shot across the helpless Pickford.

Having left the field to boos at the interval, the Sunderland players returned to resigned indifference.

Sebastian Larsson was furious not to be awarded a penalty when his free-kick appeared to strike Sigurdsson’s arm and was booked for his prolonged protests, and Fabio Borini saw a 64th-minute strike deflected into the side-netting by Alfie Mawson.

Billy Jones fired wide from close range after Fabianski had parried substitute Wahbi Khazri’s 69th-minute free-kick and the keeper made a fine double-save to deny Khazri and Defoe as time ran down, but that was as good as it got.