Champions: Seven key moments on Chelsea’s road to the title 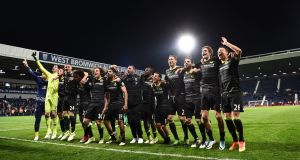 Antonio Conte is unveiled as manager

The eighth permanent managerial appointment of Roman Abramovich’s ownership of Chelsea had set the tone early. Antonio Conte had overseen his first training session down at Cobham, albeit with a shadow squad, given summer tournaments in France and the US, less than a week after Italy’s elimination from Euro 2016. He crammed his first public engagement in his new role between gruelling double training sessions, and his buzzword, “work”, would remain consistent all season. He used it or one of its derivatives 32 times in a little under an hour that day. “I’m a worker,” he said. “I like to work and I know only this road for the club to compete, to return to the Champions League, to get back to winning the title.” The tally for the season, mustered from all his press conferences, is comfortably into four figures and his players, after some initial resistance, adjusted to the drill. His coaching staff were accepted, with Gianluca Spinelli’s arrival as goalkeeping coach helping to persuade Thibaut Courtois to stay. No one better personifies the manager’s philosophy than N’Golo Kanté, prised from Leicester City, who has been a blur of energy and industry and is now the Professional Footballers’ Association and the Football Writers’ Association footballer of the year. To this manager, work ethic is everything.

The transfer deadline was approaching and Conte’s pursuit of defensive recruits appeared to be floundering. Interest in players up and down Serie A secured Marcos Alonso’s £24m arrival from Fiorentina, a fee that initially appeared inflated, but moves for Napoli’s Kalidou Koulibaly, Roma’s Kostas Manolas and Alessio Romagnoli at Milan had been knocked back. Paris Saint-Germain had no interest in parting with Marquinhos yet were more willing to sell David Luiz, a player fresh from a comically poor performance in a Ligue 1 loss to Monaco. The Brazilian made clear to the French club that he would like to return to Chelsea, with whom his agents, Kia Joorabchian and Giuliano Bertolucci, have long enjoyed a fruitful relationship. A £30m fee was agreed swiftly, the player paraded soon after in a Chelsea shirt. There was plenty of scepticism at the time, doubts based on the occasionally erratic displays of his first spell at the club. Yet Conte felt he was recruiting a winner, a player used to hoisting trophies and a charismatic leader who could lift the mood. The subsequent campaign has proved he had also brought back a libero of a defender who could thrive between more cautious centre-backs.

It was not all plain sailing. If losing at home to Liverpool had been a shock to the system, then nothing had prepared Conte for the horror of his side’s first-half capitulation across the capital at Arsenal. The hosts ran riot up to the break to lead 3-0, with the Italian’s mood thunderous in the dressing room as his players shuffled in shirking eye contact. Conte, by his own admission, is a terrible loser and the manner in which his side had been outclassed at the Emirates had him briefly questioning the task he had taken on. Yet, once his fury had subsided, clarity of thought kicked in. It was 10 minutes into the second half when Alonso replaced Cesc Fàbregas and the visitors, in an attempt to stem the bleeding, switched to a back three. They would not concede another goal for more than 10 hours of football. Victor Moses, a perennial loanee up to then, was drafted in at right wing-back for the subsequent win at Hull City and Chelsea had their system, the adoption of the 3-4-3 utterly seamless on the pitch if born, in truth, of feverish preparations back on the training ground during weeks devoid of European competition. Others have dabbled with three at the back recently but Conte and Chelsea put that formation back in vogue.

Everything clicked thereafter. The team were defensively sound – their back three would remain unaltered until mid-April – while the forward thinkers, led by the liberated Eden Hazard and brutish Diego Costa, made hay. The thrashing inflicted on Everton on Bonfire night showcased their attacking prowess, with the hosts untouchable that evening. But it was arguably at Pep Guardiola’s Manchester City in early December where Chelsea truly served notice that the title could be theirs. A goal down and still staggered that Kevin De Bruyne had contrived to strike the woodwork as a second beckoned, Chelsea might once have wilted. Instead, with Fàbregas to the fore, they rallied. Their finishing was ruthless, with City, reduced to nine men before the end, left livid as the contest veered away from them. Guardiola’s side arguably never recovered their poise in the title race. Conte and his players departed convinced this could be their year, with that win one of 13 in succession to equal Arsenal’s record in a single season. After the last of that sequence, against Stoke on New Year’s Eve, Spurs languished 13 points back in fifth place. Bridging that gap ultimately proved beyond them.

Diego Costa is not permitted to rock the boat

Conte had gone out of his way to instil a sense of unity, whether organising team meals in swanky London eateries, barbecues at Cobham, making an impromptu appearance at the staff Christmas party or buying bottles of wine and prosecco for all employees and signing a note to each, carrying a quote attributed to Hannibal (“We shall either find a way or make one”), thanking them for their hard work. Everything centred on that spirit of togetherness that he felt was essential to succeed. So when Costa was unsettled by interest from the Chinese Super League club Tianjin Quanjian in mid-January, the belief that everyone was pulling together felt threatened. Yet, rather than panicking, Conte turned that training ground tantrum into a show of strength. Costa was dropped for the game at Leicester City, which was won handsomely in his absence, and the manager instantly reasserted his authority. Costa realised this was not a battle he could win, knuckled down and made a scoring return against Hull the following week. No one has questioned the manager since.

The only time doubt crept back into Chelsea’s play was last month. An unexpected home defeat by Crystal Palace was followed a fortnight later by an uncharacteristically anaemic performance at José Mourinho’s Manchester United, a loss that allowed Spurs, on a blistering run, to close to within four points. “That was our worst moment because we knew we had to play Tottenham in the FA Cup semi-final and then, three days later, face Southampton in the league,” Conte said. In that context, his decision to rest Hazard and Costa at Wembley felt risky, given the psychological significance of that high-profile derby. It ended up feeling like a masterstroke. Spurs may have been the more threatening team at the national stadium but Chelsea did what champions do and found a way to prevail. Willian, the previous season’s player of the year, scored a double and, just as Tottenham sensed the momentum was swinging their way as they equalised at 2-2, the cavalry tore from the bench to seize the day. Hazard, another player who has benefited from the switch in system but a forward revived now that he is fit again, was untouchable, with his cameo as mind-boggling that day as his display, capped by a wonderful solo goal, in the dismissal of Arsenal earlier in the year. Those are performances that will linger long in the memory. Chelsea prised apart the Premier League’s best defence four times in 90 minutes and pepped their own run-in in the process.

The trickiest remaining test of Chelsea’s credentials came at Goodison Park at the end of the month. Spurs had beaten Palace in midweek and were preparing for their north London derby against Arsenal, eager for Everton to check the leaders’ progress. For more than an hour they had hope. Then Pedro, such a peripheral figure over his first campaign in England, belted the visitors’ opening goal from distance and the game was up. The Spaniard has scored 12 this term, an eye-catching tally for a player who had not seemed particularly suited to life in the Premier League, to pin Willian to the sidelines. He is another of this team’s unsung heroes, along with Gary Cahill – now a scorer of John Terry-esque timely goals, and another who registered at Everton that day – and the excellent Courtois, Moses and the steady Nemanja Matic. As a collective, this tight squad have carried all before them as Conte bellows his instruction from the sidelines. Their campaign has been a triumph.