Liverpool mayor: derby match should be played at Goodison Park 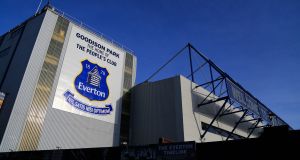 Goodison Park should be the venue for the potentially title-deciding Merseyside derby but there are concerns fans may congregate outside. Photograph: Getty Images

Liverpool’s potential Premier League title-winning meeting with Everton should be staged at Goodison Park, according to the city’s mayor, Joe Anderson.

A local safety advisory group meeting on Monday is expected to decide whether to allow Everton to host the match or demand it be played at a neutral venue.

Jürgen Klopp’s team could claim Liverpool’s first championship for 30 years and a 19th in total if they defeat their neighbours on June 21st, should Manchester City have lost at home against Arsenal four days earlier.

Mark Roberts, the UK’s national football police chief, has identified the Merseyside derby as a “high-risk” match that may need a neutral venue amid concerns over demands on police during the coronavirus pandemic and fans gathering outside stadiums.

Merseyside police have said they have no objections to policing any matches in Liverpool during the pandemic and Anderson believes the derby should be contested at Goodison Park.

“We are in a better place than we were four weeks ago and we’ve been able to convey why it’s so important nobody congregates outside or near grounds,” the mayor told the Athletic. “We have had the opportunity since then to speak to fans and the clubs have done their part and got the message across that the supporters need to stay away. Both clubs have made it clear. Jürgen Klopp has made it clear.

“So I would have no objection to the games being played at our clubs’ home grounds, both the derby at Goodison and Liverpool’s games at Anfield.”

Anderson did admit reports that the R rate had risen above one in the north-west were a concern. “The government only moved towards the relaxing of lockdown when the R rate dropped below one and the figures we’ve got is that it has climbed back above that in our city now,” he said.

“So that is clearly a big concern – but if people abide by what we are asking them to do, the games should be all right . . . Merseyside police have made it clear they support the derby going ahead and they are the ones responsible for policing outside the ground and maintaining social distancing.”

If City do not lose against Arsenal, Liverpool could become champions by beating Everton and then Crystal Palace in their following match, at Anfield, on June 24th. – Guardian