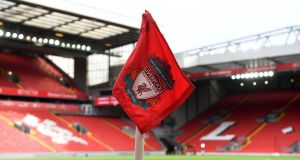 Liverpool have made a pre-tax profit of €48.9 million and increased revenues to €620m. Photograph: Michael Regan/Getty

The latest accounts, for the year ending 31 May 2019, show turnover rose by £78m (€90m) thanks to increased media, commercial and match-day revenue. The turnover of £533m (€620m) enabled Liverpool to invest a record £223m (€260m) on players, notably the signings of Alisson, Fabinho, Naby Keïta and Xherdan Shaqiri. There were also new contracts for 11 players including lucrative deals for Mohamed Salah, Sadio Mané, Roberto Firmino, Jordan Henderson, Trent Alexander-Arnold and Andy Robertson.

Liverpool’s media revenue increased by £41m (€47.7m) to £261m (€303.8m) thanks mainly to the Champions League broadcasting deal that started in 2018-19, when Klopp’s team won the club’s sixth European crown by defeating Tottenham in Madrid. In a season that also brought a second-place finish in the Premier League and enthralling title race with Manchester City, commercial revenue rose by £34m (€39.5m) to £188m (€218.8m) and match revenue by £3.5m (€4m) to £84m (€97.8m). Nine new commercial partnerships were signed, including a first official training kit partnership with AXA.

Andy Hughes, Liverpool’s chief operating officer, said: “This continued strengthening of the underlying financial sustainability of the club is enabling us to make significant investments both in player recruitment and infrastructure. Being able to reinvest over £220m on players during this financial period is a result of a successful business strategy, particularly the significant uplift in commercial revenues.

“The cost of football, however, does continue to rise in transfers and associated fees but what’s critical for us is the consistency of our financial position, enabling us to live within our means and continue to run a sustainable football club.”

Liverpool have committed £50m (€58m) to a new training facility in Kirkby, which is due for completion in July. The club also has plans for a £60m (€70m) expansion of the Anfield Road stand that will raise Anfield’s capacity to 61,000.

Hughes added: “These financial results and this sustained period of solid growth is testament to our ownership, Fenway Sport Group, who continue to support the club’s ambitions and continue to reinvest revenues both in strengthening the playing squad and the club’s infrastructure to build for the future.” - Guardian