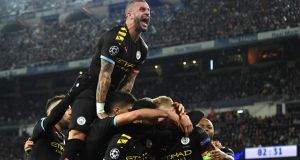 Kyle Walker joins in as Kevin De Bruyne of celebrates with team-mates after scoring his team’s second goal during the Champions League round of 16 first leg match against Real Madrid at the Bernabeu. Photograph: David Ramos/Getty Images

Manchester City’s players have missed a clutch of penalties this season. At times they have seemed cursed from the spot. And so when Kevin De Bruyne stood over a late penalty to put his team in charge of this slow-burning Champions League tie, it is safe to say that the nerves of the travelling support were jangling.

De Bruyne was a snapshot of composure and when he sent Thibaut Courtois the wrong way, it was the prompt for City to feel their hopes surge. The club have won only four knockout ties in nine seasons in this competition. A fifth is now within their grasp and this result was nothing more than they deserved.

For a while it felt as though it might be another of those nights when they lamented a lack of cutting edge, together with an unnecessary concession. Isco’s goal gave Real Madrid an advantage they had scarcely deserved.

But City bent the script to the force of their will. De Bruyne dug out a sublime cross from which the tireless Gabriel Jesus headed the first away goal and when Raheem Sterling, on as a 73rd-minute substitute, was sent sprawling by Dani Carvajal, De Bruyne did the rest.

There was still time for Sergio Ramos to be sent off for a last-man foul on Jesus and the hard truth for Real is that City might have put the tie out of sight. As it is, their lead is significant.

Guardiola’s selection had raised eyebrows, setting one of the occasion’s major storylines in train. He had been accused on Tuesday of over-thinking previous Champions League knockout matches, of worrying too much about the opposition in terms of how he set up. One thing is clear – the City manager does not do conventional.

He omitted Fernandinho, Raheem Sterling and Sergio Agüero from the line-up, which nobody had seen coming, particularly not the first two names. Sterling had been passed fit after a hamstring injury and was bitterly disappointed to have been a substitute. Fernandinho would get on in the 33rd minute after the luckless Aymeric Laporte was forced off with another injury problem.

City had been here before. The high-water mark of their progress in this competition came in 2015-16 under Manuel Pellegrini when they made it to a semi-final against Real. After a 0-0 draw in Manchester they went down 1-0 in the return in what is remembered as the meekest of surrenders. They did not have a go. Guardiola wanted it to be different this time.

As always, his formation contained plenty of fluidity, with one of the details being De Bruyne’s starting position as one of two strikers. The other was Jesus but, after a matter of minutes, he peeled to the left and allowed Bernardo Silva to move up front. De Bruyne and Silva made for an unlikely attacking partnership but there were times when they dropped to allow Riyad Mahrez and Jesus to push up as split-strikers. It was 4-4-2 but not as we know it.

Guardiola’s mind whirred and so did Zinedine Zidane’s. What Guardiola wanted was for De Bruyne and Silva to lead a high press and, as Zidane worked out how to build the play, the first half seemed a little stuck. The tension was palpable. Everybody knew that the finest of details, perhaps an individual error, could be decisive.

City could be pleased at how they kept Real at arm’s length before the interval, although they did give up one clear-cut chance. Karim Benzema found space to head Ferland Mendy’s 31st-minute cross towards the corner and it took an excellent save from Ederson to keep him out. For a split second, Vinicius Junior looked the favourite to reach the rebound, with Ederson grounded, before City closed ranks.

Guardiola’s team had their moments in the first half. Indeed, they had more than Real. The best one followed a De Bruyne pass on 21 minutes and a jink inside by Jesus. The shooting chance had opened up but from an angle on the left, his effort was too close to Thibaut Courtois. De Bruyne was wildly off-target after a link-up with Mahrez and, in stoppage-time, Jesus shot low after Courtois had flapped at a corner. The ball almost went in off Ramos before Real smuggled it off the line.

It had been billed as the beginning of the week of truth for Real, with the clásico against the La Liga leaders to follow here on Sunday. Zidane sprang a surprise of his own by leaving out Toni Kroos and City felt that their opponents were vulnerable. The value of an away goal was always going to be huge and Guardiola’s team came close to it at the start of the second half.

First De Bruyne led a break and found Jesus, who curled wide of the far top corner, and then Mahrez found masses of space behind the Real defence following a ball over the top. He probably had more time than he realised, though, rushed the shot, and saw Courtois block.

City were showing an easy balance and they appeared untroubled. Then, out of nowhere, they contrived to present Real with the breakthrough. Kyle Walker was robbed by Vinícius and suddenly Isco was free in the middle. Vinícius found him and Isco finished. It was simple but devastating.

City were down. But they were far from out. – Guardian