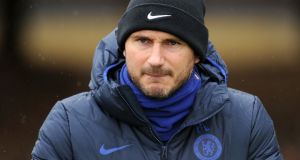 Frank Lampard: “A big part of my job is to explain to the players that over two legs we need to be at our maximum.” Photograph: Alex Burstow/Getty Images

Frank Lampard has warned that Chelsea have to be prepared to suffer when they play Bayern Munich this evening and urged his players not to let their standards drop after halting a worrying run by beating Tottenham.

While Chelsea’s manager said greater focus was key to his inconsistent side’s 2-1 home win over Spurs on Saturday, he knows they are likely to come under severe pressure in the first leg of their last-16 Champions League tie against Bayern.

Lampard believes it will take a performance of immense tactical discipline to progress against the German champions, who reached the knockout stages by winning all six of their group games. He also spoke about the importance of making sure the tie is still alive before the second leg in Munich on March 18th.

Bayern have far more experience at this level than a youthful Chelsea side and they enjoyed their last trip to London, smashing Spurs 7-2. Spurs chased the game after falling behind and Lampard does not want his defence to become exposed against a finisher of Robert Lewandowski’s class.

“We’ve got players with Champions League experience in this group, as well as younger players in the early stages of their careers, particularly in the Champions League,” Lampard said. “They have to understand why I keep talking about the levels going up, and what the mindset levels are. A big part of my job is to explain to the players that over two legs we need to be at our maximum.

“Going into the game we must make sure every box is ticked in both games. We can’t get caught up in game moments. After the game, we will probably suffer. Bayern Munich are an incredible side with the ball. They’ve got some really talented players who keep the ball and use the ball well. If we have to suffer, we have to suffer. That’s our job over the next two games.”

Chelsea had gone four league games without a win before facing Spurs and Lampard, who could bring Willian and Tammy Abraham in for Ross Barkley and Olivier Giroud respectively, spoke to his players about developing a more ruthless mindset before they faced their London rivals.

“I felt if you look at our recent form in the league, we were playing well,” he said. “It’s difficult to keep saying that. A lot of parts of our game are good but the important parts of the game, which is in the final third, scoring goals, finishing off what you’ve created and then making sure we don’t concede with absolute focus, were slightly short. It was clear we were slightly short.

“If you have 20 shots in a game and don’t score, and the other team have two and score, and that’s recurring, then that’s an issue. When I wrote that down, it felt like a mindset thing. If you’re not scoring, it can be a mixture of many things. It can be confidence. It could also maybe be something that’s slack, slightly, or how you prepare through the week.

“It was just about being honest. The beauty of the meeting was everyone felt the same. I’ve been in meetings where people can’t find the reason – even if the managers says what it is and players disagree. But I’ve got a really good group. The reaction to the meeting, and the reaction against Tottenham, was spot on. What we can’t do now is forget what made us beat Spurs. That was a start for us on Saturday. We need to keep going.”

Lampard captained the side when Chelsea upset the odds by beating Bayern on penalties in the 2012 Champions League final. He is not concerned if they are the underdogs again.

“My job is just to prepare for the game and look at the opponent, see their strengths, see our strengths and ask can we find weaknesses there?” he said.

“I understand if people do call us the underdogs because Bayern Munich are so strong. Maybe we don’t have that experience but these things are there to change. It’s there to turn to turn it around, to overcome being the underdog. Those are the best stories in sport.”

Lampard is expected to play three at the back again and he said his team were up in front when César Azpilicueta, Chelsea’s captain, caught him with a heavy challenge during a keep-ball session in training yesterday.

“Thank God it was Azpi, because he’s in the team regularly,” the manager joked. “I’d be worried if it was someone who wasn’t playing, going in with two feet.”

Bayern top the Bundesliga by a point and have improved since replacing Niko Kovac with Hans-Dieter Flick in November. Flick noted that Chelsea make mistakes at the back and said Lewandowski, who has scored 40 goals in all competitions this season, is in the form of his life.

Joshua Kimmich explained how Bayern have become more dangerous in attack since Flick was placed in caretaker charge.

“The way we play football has changed a bit,” the midfielder said. “We try to attack higher up the pitch and try to force mistakes and take more risks when we attack. I’d be very happy with the result we got against Tottenham.”