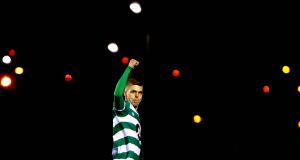 The former Glenavon man’s cross led to Akin Odimayo scoring a fourth minute own-goal before he marked his debut with a thunderous strike 13 minutes later.

Odimayo’s Reading teammate, fellow loanee Andre Burley, got booked in the run up to the opener and incurred another just before the second. Referee Ray Matthews duly sent Burley off, leaving the struggling Blues down to 10 men for 75 minutes.

Aside from one chance which former Hoop Michael O’Connor saw deflect off Lee Grace and over the bar at 1-0, Waterford failed to threaten.

Waterford boss Alan Reynolds expected a rampant Rovers to attack from the off but didn’t legislate for gifting an opener after just four minutes.

Jack Byrne orchestrated the move by freeing Marhsall down the right flank and his cross was sliced into the far corner by Odimayo’s wild swing.

Michael O’Connor, booked for the second game on the spin, then fashioned a decent chance to level on 13 minutes.

His namesake Kevin started the move by teeing up Ali Coote to spot O’Connor, but Lopes scampered across to block his shot.

Burley then deepened Waterford’s task by clattering into the back of Dean Williams and picking up a second booking.

Waterford failed to clear Byrne’s deep free-kick, allowing Liam Scales to lay the ball into the path of Marshall 20 yards out. The wing-back gave no chance with a first-time curler into the top corner.

Sustained Rovers pressure should have yielded a third before the interval. Scales nodded wide from a corner and Dylan Watts was also marginally off-target with a low drive. The midfielder also skimmed the top of the crossbar with a deft header from Byrne’s cross.

Only the brilliance of Murphy denied Rovers in the second half as he saved from both Dean Williams and Watts late on.

1 Sideline Cut: Vignette shows why Bird is the true shark in The Last Dance
2 O’Leary says himself and Kingdom star Galvin were the best of enemies
3 Seán Óg Ó hAilpín regrets ‘callous’ aftermath of Cork strikes
4 How 1995 remains a key part of the Springbok spirit
5 Rory McIlroy now realising the power his words carry as world’s number one
Real news has value SUBSCRIBE