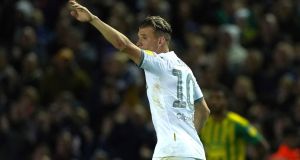 Ezgjan Alioski’s deflected first-half effort was enough to sink West Brom and send Leeds back to the top of the t Championship table.

Alioski’s low angled shot hit former Leeds defender Kyle Bartley before nestling in the bottom corner and Marcelo Bielsa’s side held on to leapfrog the Baggies and into pole position.

West Brom, who remain in the top two, slipped to their first league defeat of the season, while Leeds secured their second win in five matches.

Nottingham Forest, who stay third, missed the chance to go top as they were held 1-1 at Blackburn.

Adam Armstrong’s opener for Blackburn just after the hour-mark was quickly cancelled out by Forest winger Joe Lolley and Forest extended their unbeaten league run to nine matches.

Fulham climbed up to fourth after cruising to a 4-1 win against 10-man Reading at the Madejski Stadium.

Tom Cairney curled Fulham into an early lead before Reading midfielder John Swift was sent off for his second bookable offence.

Aleksandar Mitrovic then struck twice in three minutes to put the Londoners 3-0 up at the interval and Cairney added his second in the 68th minute. Yakou Meite scored Reading’s late consolation.

Preston missed out on the chance to climb into the automatic promotion places but stretched their unbeaten league run to seven matches after drawing 1-1 at Middlesbrough.

Boro drew level before the break through Preston defender Darnell Fisher’s own goal, two minutes after Josh Harrop had given the visitors the lead.

Hull are undefeated in their last five league matches after Tom Eaves’s second-half header secured them a 1-0 home win against Sheffield Wednesday.

Wigan won 1-0 at home against Birmingham, who slumped to a third straight league defeat thanks to Anthony Pilkington’s solitary second-half strike.

In the battle of the bottom two at the bet365 Stadium, Juninho Bacuna’s late goal snatched Huddersfield a first win of the season.

Bacuna fired into the top corner in the 82nd minute to lift Huddersfield, who had not won since February, above Barnsley in the relegation zone, while Stoke’s winless start extended to 10 matches.