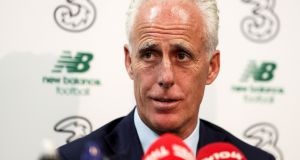 Mick McCarthy says he remains positive about Ireland’s ability to maintain their challenge for qualification in the games. Photograph: Laszlo Geczo/Inpho 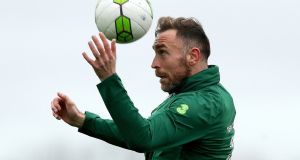 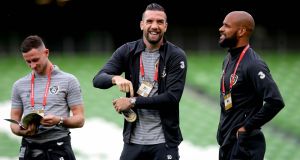 Shane Duffy (centre) and David McGoldrick (right) are still in with a shout of featuring against Georgia and Switzerland, according to Mick McCarthy. Photograph: Ryan Byrne/Inpho

Mick McCarthy says he will not know until at least the weekend whether or not Shane Duffy and David McGoldrick can play any part in the Republic of Ireland’s European championship qualifiers against Georgia and Switzerland. And he has not, he insists, given up on the pair being fit even for the game in Geneva after conversations with the players in which they themselves still held out some hope.

Neither is included in his squad of 24 for the games but the manager insists that they still might make it. The list of confirmed absentees at this stage includes Harry Arter, Robbie Brady, James McCarthy, Shane Long and, of course, Richard Keogh, while Enda Stevens is ruled out of the match in Tbilisi due to suspension.

Despite the problems, McCarthy says he remains positive about Ireland’s ability to maintain their challenge for qualification in the games. “I’m a glass-half-full...” he starts before admonishing himself. “It’s probably the wrong terminology with the things that are going on. But I’m positive about it. Whatever players turn up, we will get the team together and we can go out and try and beat them both and always feel that we can.”

McCarthy says he will not give too much thought to the question of who deputises for Stevens until Sunday when he sees who actually checks into the team hotel. The manager insists, though, that he is happy with the options available to him there and across the team as a whole, although at his press conference in Aviva’s Dublin offices yesterday, he didn’t do much to disguise the fact that he would be that little bit happier if Duffy and “Didsy” were on board too.

“There’s no point worrying about it,” he says. “I’m disappointed to lose Enda but I’m still holding out for Duffer as there was a bit of optimism when I spoke to him.

“Didsy was optimistic (too but) I honestly don’t know. They tell me he is back on the grass this week (and) generally when they say you are back on the grass it means that you are back to doing something in terms of football work. So until I get an absolute no from him, the club or the medics, I’ll retain optimism.”

There will no pilfering from the Under-21 squad on this occasion with Troy Parrott amongst those who were included in McCarthy’s original list of 41 – sent to clubs to alert them of possible call-ups –  but who were then omitted from the final squad.

Michael Obafemi and Aaron Connolly will also be available to Stephen Kenny, who is due to name his squad for the qualifying game against Italy in Abbotstown today.

McCarthy, meanwhile, said that he feels “desperately sorry” for Keogh, who faces a major battle to play at the highest level again after suffering a serious knee injury in a car accident last week.

Keogh had stayed out drinking with a number of other players after a Derby County team-building exercise and was later a backseat passenger in the car belonging to Welsh international Tom Lawrence when it was involved in an accident.

“Should he have been in a car that one of them was driving? No, he shouldn’t,” said McCarthy who suggested that Keogh will need two operations and faces 15 months away from the game; something that would take him well past his 34th birthday and into the final six months of his club contract. “Should he have been part of that? No, he shouldn’t. But I do feel desperately sorry for him because at his age and with the injury that he’s got, it’s career-threatening, there is no doubt about that.”

McCarthy said that the player was paying “a high price” for what had clearly been “a mistake” but added: “He’s been exceptional for me and he has had an exceptional career; hopefully he has some more games.”

He was less forthcoming about John Delaney’s departure although he did say he was grateful to the 52-year-old for bringing him back for a second stint as Ireland manager.

The pair had been friendly but have had no contact, McCarthy confirmed, since Delaney went on “gardening leave” in April and he was told by the association not to speak to the former chief executive.

“It’s not a surprise to me,” he said of the announcement of Delaney’s departure over the weekend. “But I’m here to talk about the games.”