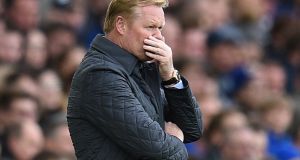 Ronald Koeman finished his last, brief, funereal press conference as Everton manager with a dismissive: “Write what you like to write.” He cannot be surprised that his Goodison Park obituary now follows.

There was a note of defiance in the 54-year-old’s assessment of the 5-2 mauling by Arsenal on Sunday when he insisted he could arrest Everton’s swift and steep decline. According to friends, Koeman was under the impression he retained the support of Farhad Moshiri, the club’s major shareholder, when he dined at San Carlo restaurant in Manchester later that evening with his wife, Bartina; and again when he arrived for training at Finch Farm yesterday morning shortly before the chairman, Bill Kenwright, and the chief executive, Robert Elstone, brought news that Moshiri had decided to make a hefty severance payment for the second time in 16 months.

Koeman was not solely responsible for the malaise that has gripped Goodison during Everton’s worst start to a Premier League season since 2005-06. The failure to replace Romelu Lukaku during the expensively flawed recruitment drive this summer ensures the director of football, Steve Walsh, and a board that sanctioned the £140 million (€157 million) transfer strategy are tainted by Koeman’s sacking. But that does not mean the decision is without substance.

Everton have been adrift under their £6 million-a-year coach who, after 17 matches in all competitions, appeared at a complete loss over how to utilise the resources at his disposal. Yes, Koeman faced a demanding start with Europa League qualifying rounds to navigate and Manchester City, Chelsea, Tottenham Hotspur, Manchester United plus Arsenal to play inside the first nine league games. The hectic fixtures schedule restricted the time Koeman had to train with a new-look squad, a serious problem as recovery sessions became more prevalent at Finch Farm. He had not, despite his cold detachment, “lost the dressing room”. But he and Everton had badly lost their way.

Frequent changes in personnel and formation plus nine half-time substitutions in the last 15 games demonstrated the Dutch man’s extensive search for a winning formula – and his selection mistakes – but he generated confusion throughout the ranks rather than results.

Koeman’s team this season have had no identity and precious little threat, pace, width or balance. Belief has evaporated, too, unsurprisingly after a run of seven defeats in 11 matches and with Everton third from bottom of the Premier League. It was painfully absent among supporters on Sunday even after Wayne Rooney had swept Everton into a surprise lead.

The manager’s insistence on shoehorning Rooney and the record signing Gylfi Sigurdsson into the same side confined natural wide players such as Ademola Lookman and Kevin Mirallas to the bench, while denying Rooney or Sigurdsson opportunity to impress in their favoured No 10 role. Several issues could be resolved by an established, quick right-back and left-winger but Koeman will not be around to welcome back Séamus Coleman and Yannick Bolasie from long-term injuries later this year.

With the exception of the £30 million goalkeeper Jordan Pickford, Nikola Vlasic, the £10 million deadline-day signing from Hajduk Split, and Rooney – when played in his suited position – few of the summer recruits have impressed. Almost £70 million was spent on Sigurdsson and Davy Klaassen at Koeman’s insistence. Both have made anonymous starts. Rooney, Sigurdsson and Klaassen prefer to operate in a central role, and the former manager’s thinking was clouded as he persisted with two, sometimes all three, in his starting line-up with predictably ponderous results.

Koeman admitted only on Friday: “What is the best formation? What is the best striker with Wayne, Sigurdsson, Klaassen? We struggled at the beginning to get the right formation and that makes it difficult. Then not good results and that brings us back to the lack of confidence.”

Six weeks and £45 million were spent prising the Iceland international from Swansea City. He may prove his worth eventually but it is mystifying, given the make-up of Everton’s squad, that time and money were not spent on a striker.

Only Rooney has arguably offered an improvement on Ross Barkley, the homegrown talent whom Koeman regularly chastised last season and who almost left this summer. It will say everything about their relationship should the England international now sign the contract he rejected last term.

Oumar Niasse was another player marginalised by Koeman – being told to find a new club after playing 45 minutes of the former Southampton manager’s first friendly – only to be brought in from the cold because of the dearth of forward options available at Everton. The irony of Niasse scoring the final goal of Koeman’s Everton reign will not be lost on the coach.

The fundamental problem of having to win Premier League matches without an established, experienced goalscorer will not be solved by the Dutch man’s departure. It was, Koeman explained on several occasions, a collective decision several days before the transfer deadline not to pursue expensive alternatives to Olivier Giroud who were “down the list”. Only he, however, has been punished for it.

Not that there is much sympathy for Koeman among the Everton support. Their relationship was distant from the start, with his longing for his former club Barcelona and even, embarrassingly, red decorations on his Christmas tree stirring criticism and the belief he viewed Everton as a short-term, lucrative chore.

It is untrue that Koeman did not care. He cared passionately about results, befitting his achievements and status as a player, but whether he cared the same for Everton is open to debate – and now a moot point. His successor has high ambitions to fulfil, yet no established striker. Guardian service

3 Sarah Stirk: From pro tennis dreams to the face of Sky Sports Golf