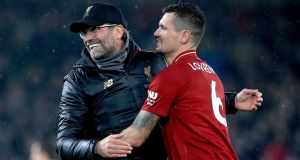 Jürgen Klopp has allowed Liverpool’s players to go on holiday on condition that their destinations are cleared by the club and they make immediate arrangements to leave any country affected by a spike in coronavirus.

The Liverpool manager has given his squad several weeks off after winning the Premier League title and scheduled mid-August for the start of pre-season training. Given the potential disruption caused by changes in quarantine rules, however, such as those imposed on Spain on Saturday, Liverpool’s players have had to submit holiday plans to the club and been told that any sudden flights out are their own responsibility.

The Brazilian goalkeeper Alisson has confirmed he will not be returning home during the break because of the high infection rate in the country, and Klopp has spoken to his squad about minimising the risk to pre-season training.

“We had this talk,” the Liverpool manager explained. “It is a conversation without a solution to be honest. The boys can go on holiday, obviously, and we know from everybody where they will go, and it’s all okay – these countries are all completely fine. But the situation can change, constantly, so now this is the responsibility of the boys. They must make sure they know when they have to leave the specific country. They have to follow the news and they have to react. It is not our job to say: ‘Maybe Spain closes the border again,’ or whatever. The boys are responsible for that, and they know that as well.

“We will do as much as we can to help but they need to be aware of the situation. None of us can go on holiday and do the things that maybe you could do in the past. We all have to still be disciplined, but I will say the boys were exceptional. Not only our players, but all the players in the Premier League. Not one single new case after the season restarted – that shows they are good boys, all of them, and I hope it stays like this and we will come back and train again.”

Liverpool have “flexible” pre-season plans, according to Klopp. Their usual training camp in Évian remains an option but the champions have lined up two alternative places in England should quarantine restrictions be imposed on France. Klopp admits the predicament facing Premier League clubs still involved in European competition, with next season scheduled to begin on September 12th, is far worse.

The manager said: “We decided on a date when we would come back to training and whatever happens afterwards we will see if we have enough time to train. We have to play the Community Shield before the start of the season probably, but we don’t know when exactly and it must be when we are just back in training. So train and play the game.

“It is the same for all teams pretty much, though not for the teams who are in the Champions League or Europa League still. For them it is really tricky. If you are really successful in Europe this year, then it is unbelievably intense for these teams. For us the situation is okay, but for others it will be much more difficult.”

Klopp admits uncertainty over next season’s Champions League will influence Liverpool’s transfer activity this summer. Dejan Lovren completed his £10.9 million (€11.9 million) move to Zenit St Petersburg on Monday and Adam Lallana is close to signing a three-year contract with Brighton, but Klopp insists there will be no rush to sign replacements.

“It will be tricky and we have to deal with the circumstances. The situation, as we have said several times, is it is really difficult to judge the future. We qualified pretty early for the Champions League and usually that is good, but a few weeks ago nobody knew if the Champions League could be played next season. Can you count on the money from the Champions League and how much will it be? That is all uncertain and that is what we consider because we are not only responsible for the success of the club, we are responsible for all the people at the club and that means everyone who works here.

“As long as we don’t know exactly about things, we have to wait. Time will hopefully bring a bit more clarity about the future and then we will make our decisions. We will have solutions. We have young players. The size of the squad is not that important to me, the quality of the squad is very much so. I think we will have a really good squad for next season.”