Sporting Cathedrals: The Maracana and its myth and magic

Built and rebuilt for Brazil to win the World Cup, the stadium is also linked with calamity 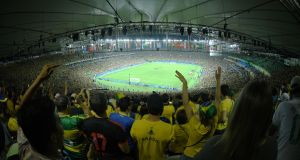 The Maracana wasn’t so much built as a venue for the 1950 World Cup as the stage on which Brazil would win it. When things didn’t quite go to plan, the playwright and novelist Nelson Rodriquez seems to have pretty much caught the local mood by describing the team’s unexpected failure as “our Hiroshima”.

Sixty four years later, when I first laid eyes on the place ahead of the the country’s second crack at winning the game’s greatest prize on home soil, the stadium’s name was still inextricably linked with a calamity now almost universally known as the Maracanazo.

It was a different stadium, though, remodelled and renovated at, once again, huge cost. And this time Brazil didn’t make it out onto the pitch with the team’s demise occurring five days before the final in Belo Horizonte where they were humiliated by Germany.

I had read all about 1950 before travelling for the tournament; how a stadium the construction of which had been championed by the country’s most famous sportswriter, Mário Filho, for whom it is officially named, had been planned as a bold expression of Brazilian national confidence about its own position in the post war world.

They were so confident, in fact, that they didn’t start building it until less than two years before the other teams arrived. Like the football, they didn’t quite pull it off.

The 21 gun salute before the start of the first game left those spectators positioned under the roof covered in a light dusting of fresh plaster and the hosts would lead 1-0 in their game against Yugoslavia before the Red Star Belgrade striker Rajko Mitic made it onto the pitch because he injured his head on an exposed piece of steel in one of the stadium’s underground passages.

It would not, in fact, be formally declared to have been completed until 1965.

Still, the team won its four games at the stadium, the last two by a combined 11 goals, in advance of what was in effect the tournament decider though technically the final second round group match against Uruguay.

Brazil needed only a draw and to say that the team’s success was taken for granted would be to seriously understate the matter. On the day of the game one local newspaper ran a picture of the team captioned as champions. The Uruguayan captain, Obdulio Varela, is said to have bought a copy, placed it on the floor of his hotel bathroom and encouraged team mates to urinate on it.

Their own association president seems to have been more inclined to raise the white flag, advising the players that keeping the hosts to four goals would represent a success of sorts and the head of Rio de Janeiro’s local government then hailed the Brazilian team as the victors in a pre-match speech. They lost 2-1.

The coach took a portion of the blame, Jonathan Wilson notes in Inverting the Pyramid, for edging his team towards the tactics of the teams Brazil had beaten most easily while Uruguay sought to emulate the approach taken by Switzerland who had drawn 2-2 with the hosts in Sao Paulo.

In a blow to Filho and the many others who believed the team’s ethnic diversity was key to its potential, the side’s three black players were scapegoated disgracefully too while the crowd inside the stadium - reckoned to be a world record 210,000 - shouldered a portion of the blame; their shocked silence as the Uruguayans came from behind widely seen as failing a team that desperately needed their support at just that moment.

Brazil would not play another game for nearly two years and the team did not kick a ball at the Maracana for almost four but as the team rose to prominence in the late fifties and through the decade that followed, winning three out of four World Cups, the reputation, more myth really, of the stadium that hosted many of its home games steadily grew.

The striking aerial shots of its iconic flat, circular roof certainly helped but it was the distant (for Europeans of the time), slightly hazy association with players like Pelé, Garincha, then Zico and Sócrates that did far more to generate its allure abroad. Both the players and tactical approaches changed through the period but Brazil became the team to beat in world football and a huge favourite among neutrals around the globe.

Explaining his willingness to be part of Ireland’s ill-fated 1982 South American tour when so many others had pulled out - and he had good reasons to stay at home himself - Liam Brady said that playing at the Maracana would have ticked a very big box for him. It was only after he got on the plane, he said, that anyone told him the game against Brazil was to be in Uberlandia.

The Brazilians did enjoy some success at the Maracana, though. At the end of the 80s, the team won its fourth Copa America there without conceding a goal in the final three games played, the last being a 1-0 defeat of Uruguay.

The stadium was still essentially the same one built 40 years previously at that stage and still capable of holding huge crowds. The record for a derby game between two of the four Rio de Janeiro clubs that have used it at various stages down the years, Fluminense and Flamengo, was 190,000. A-ha are said to have played to 198,000, Frank Sinatra to 175,000, and 95,000 people apparently turned up to see a volleyball match.

Through the nineties renovation works began and a full scale rebuild was undertaken ahead of 2014 that would dispense with the standing areas and, it was argued, a key part of the place’s soul.

Capacity was reduced to under 80,000. The cost of the work, put at some €350 million, sparked the very same debate that the original construction had with critics angrily estimating how many schools or hospitals the money might have paid for.

The motivation of the project’s proponents, meanwhile, was precisely the same as before too and they were, in the end, to be similarly disappointed.

The 2016 Olympics, for which it was also used, did provide some sort of redemption for a Brazil team that beat Germany in the final on penalties. After that, though, the Maracana quickly fell into disrepair as the company that had contracted with the city to oversee its running, became embroiled in a huge national bribery scandal, suffered a financial crisis and failed even to pay for its basic upkeep.

In January 2017 it was reported to have been broken into and looted with copper wiring, fire extinguishers, television sets and a bust of Filho all stolen. Rio’s mayor made a great play of announcing that the city was taking its Maracana back but the management would soon be handed to the French company, Lagardère, which had finished second in the original bidding process.

In addition to being a significant tourist attraction, it continues to stage regular events, most obviously both Flamengo and Fluminense club games and when the former won the league last year, their average home attendance was 55,000; not the sort of raucous, hang from the rafters crowds that used to pack into the place but pretty respectable nevertheless.

By comparison with the Estádio Nacional de Brasília Mané Garrincha, built from scratch for 2014 and currently the world’s third most expensive stadium after Wembley and Tottenham’s new home, but currently used for next to nothing, it is a model of good financial planning.

In the end, though, my problem like almost everybody else’s, when it boiled down to it, was that I did not get to see a Brazil team play in the place or their supporters cheer them on

Still, entirely selfishly, I have to say that I found it all to be a little bit of a disappointment. Reconfigured as a sprawling bowl with half the capacity of the original stadium, the Maracana of 2014 didn’t seem to pack quite the punch that I had somehow imagined it would.

The waterway from which the Maracana name is derived was a sorry affair and the stadium is surprisingly unimpressive from the outside because the pitch is below ground level and so the stand rises only 25 metres above it. Inside, it was still rough around the edges to the point of feeling unfinished again.

That manifested itself in security issues at a couple of games during the 2014 tournament, although nothing like the problems that had been experienced in advance of the World Cup with several stadiums dogged by serious problems, including a number of fatalities.

In the end, though, my problem like almost everybody else’s, when it boiled down to it, was that I did not get to see a Brazil team play in the place or their supporters cheer them on. Perhaps it could never have lived up to the tremendous hype but it was a perfectly good stage for a World Cup final really. It was just that, for the second time, somebody was about to steal the show and this time the hosts did not even get to be a part of it.

Somehow, though, the magic of that name still endures for me.