Ken Early: The secret of Liverpool’s success - failure is no longer indulged 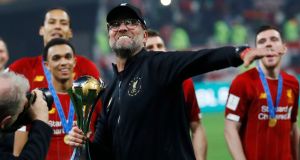 Back in February 2012, Liverpool FC’s principal owner John Henry stood pitchside at Wembley in London, taking in his first experience of success in English football.

It was a joyful scene out on the pitch as Kenny Dalglish and his Liverpool players celebrated with the Carling Cup trophy – Liverpool’s first silverware in nearly six years.

8 We think we have enough for a deposit. Should we buy now or rent a bit longer?

11 Six Nations 2021: Jack Carty among the faces that just don’t seem to fit

14 Got a tax bill? Here's nine ways you can (hopefully) reduce it

15 Blindboy Boatclub: ‘I had the choice of being a psychotherapist or be a mad bastard’

20 Oscar Wilde, my grandfather, ‘talked himself into prison’

21 ‘I worry about my child falling behind, but my own work is beginning to suffer’

26 Walk this way: 17 tips for getting the most from your daily lockdown outing

31 Can five minutes’ exercise a day make you fit?

32 Traveller who tried to book hotel wedding awarded €15,000 for discrimination

34 One mask is good. Would two be better?

36 The Capote Tapes: From impoverished childhood to cocaine-fuelled decline

37 Tipping Point: Racing people need to stand up for their sport

38 Colum Eastwood: Seamus Mallon’s offer is still on the table if unionism is interested