The official trailer for Matchday, a docuseries charting the highs and lows of FC Barcelona's 2018-19 season. Video: Rakuten TV 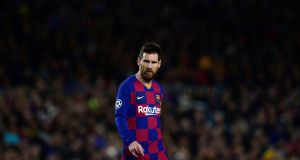 Lionel Messi’s pre-match address to his team at Anfield: “We can’t waste this opportunity, okay? Give everything, now that we are here. We have to start strong. Remember Roma was our fault. Nobody else’s. We mustn’t let the same thing happen.” Photograph: Pau Barrena/AFP/Getty

Last Friday, Barcelona became the latest big European football club to release a documentary charting the story of the team throughout the 2018-19 season.

Unlike other club documentaries, which have been produced by firms like Netflix and Amazon working with the clubs, this eight-part film is the work of Barcelona’s in-house production company, Barça Studios.

“In terms of business, we decided to evolve into an entertainment company, which is pretty normal in the US in the NBA or NFL, but not so common in Europe – especially in our industry, the soccer industry,” Lee said.

“When you are an entertainment company, you try to produce content that is engaging to fans around the world. And whereas in the past ours was more informative like that on, say, CNN, we wanted to become more like MTV in terms of production and it was within this context that we started Barça Studios . . . Matchday is the first product of our content factory that is the jewel of the crown.”

The idea that big football clubs are really entertainment companies rather than sports teams was introduced to Spanish football almost 20 years ago, when Florentino Perez became the president of Real Madrid and brought in Jose Angel Sanchez as his marketing director.

They pioneered the galacticos showbiz strategy that saw David Beckham move to Madrid while Ronaldinho was allowed to join Barcelona; everyone could see Ronaldinho was better at football, but Beckham drew more eyeballs, which, Madrid believed, meant more in the new economy of football.

Over the next few years Barcelona won most of the trophies, but Madrid made more money.

The current CEO at Manchester City, Ferran Soriano, was part of the Barcelona board that signed Ronaldinho; the story of that season was told in a 2004 fly-on-the-wall documentary by BBC Storyville, FC Barcelona: The Inside Story. Soriano told the Guardian in 2017 that clubs had gone from being organisers “of local events, like a circus” into “global entertainment companies like Walt Disney”, and it was no surprise that City were one of the first big clubs to sign up to an Amazon documentary.

But the Storyville Barcelona documentary concentrated on boardroom matters. There was little involvement from the players, who at that time still regarded camera teams poking their noses into the dressing room with suspicion.

Fifteen years on, things have changed – today’s players possibly feel more uncomfortable when there is nobody there to film them. Barcelona’s players are on a revenue-share deal to be part of this documentary and they welcome the cameras not only to the training ground and the dressing room on matchdays, but also into their homes and personal lives.

For example, we go with Lionel Messi and Jordi Alba to a barbecue at Luis Suarez’s house, where Messi laughs off the objections of a coach who is gently scolding him for eating too many strawberries: “pure sugar, pure sugar”.

Barça Studios director Paco Latorre told Forbes: “The portrait of the players that comes out of the series is something that is very positive for them.”

This is not strictly true. Naturally, the editing tries to show everyone in a positive light, yet there are some awkward elements that friendly editing can’t conceal.

We see the deferential tone coach Ernesto Valverde adopts when speaking with the players. When he gives the team-talk before the Champions League semi-final first leg against Liverpool, he sounds like he is merely offering the players advice and suggestions, as though he would not presume to issue actual instructions.

This is not surprising, really, since Barca’s senior players have won more than him and are plainly far more important to the club. Yet it does leave you wondering what the point of him actually is.

At half-time, with Barcelona leading Liverpool 1-0, we see Valverde peering at a laptop with his assistants and then squatting down, as though addressing a kindergarten group, to give some more helpful hints to the players. He talks about how Barcelona should deal with Liverpool’s pressing and makes a couple of technical points. While he speaks, you can see Messi in the background, head down, apparently in his own world, not paying the coach any heed. That’s okay, this stuff about pressing isn’t really for him.

As the team is getting ready to go back out, Messi finally speaks: “If we start to play one on one they are stronger, guys. We aren’t used to that. They are very fast. If we play this to-ing and fro-ing it’s anyone’s game. If we have the control it’s another thing, right?”

The striking thing about Messi’s message is the emphasis he gives to what might go wrong. As we are to discover, this is something of a theme in his team talks. First, we see him score two goals in the second half. The second, his 600th for Barcelona, is a 30-metre free-kick that astonishes even the other veterans like Sergio Busquets.

Weirdly, the 3-0 lead immediately starts to make Barcelona nervous, because it reminds them of the season before, when they beat Roma 4-1 in the first leg of the quarter-final, before losing 3-0 away to go out on away goals.

The story of Anfield is well-known. Liverpool scored in minutes 7, 54, 56 and 79 and Barcelona were out. We knew that. But we didn’t know that Jordi Alba was crying at half-time because he had missed a good chance and made a mistake to give away the early Liverpool goal. We might have expected that Valverde’s tactical message at the break would have more to it than, essentially, “get the ball and give it to Messi”.

And we could hardly have imagined that Messi’s speech to his team-mates as they prepared to take the field at the beginning of the match had gone as follows: “Come on people, we are going to take a step forward. We can’t waste this opportunity, okay? Give everything, now that we are here. We have to start strong. Remember Roma was our fault. Nobody else’s. We mustn’t let the same thing happen. It was our fault, nobody else’s.”

And so we saw that the best player in the world is utterly hopeless at motivation, apparently believing that “let’s talk about the thing that we desperately don’t want to happen, and get that very firmly in our heads before we go out and play,” is a sound basic format for a captain’s gee-them-up speech.

Gerard Pique, speaking some time after the match, remarks: “When they score the first goal very quickly then, I suppose, the ghosts of Rome appear.”

In truth, the ghosts of Rome were summoned by Messi to the Barcelona dressing room moments before the players went out on the field.

Based on what this documentary reveals, you can draw two conclusions. Barcelona might benefit from appointing a coach who has the confidence to address the players as a leader, rather than as a kind of helpful consultant or advisor. And Messi might be better off letting his feet do the talking.