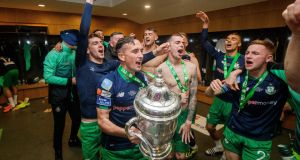 Shamrock Rovers celebrate with the trophy in the dressing room after winning the FAI Cup last year. Photo: Ryan Byrne/Inpho

Recent winners Dundalk and Cork City are among the six sides drawn to participate in the first round of this season’s FAI Cup which has been restricted to Airtricity League clubs because of the coronavirus pandemic.

While 13 of the 19 league clubs have been handed byes to the second round, Dundalk and Cork, who have won the competition in four of the past five seasons, were drawn at home on Monday with the league champions to face Waterford and City to take on Longford Town.

In the other tie drawn in Abbotstown, Finn Harps will take on St Patrick’s Athletic in Ballybofey.

The dates of the games will be confirmed as part of the wider fixture list release scheduled for later on Monday.

1 Worst sporting moment: White knuckle ride on a hate-filled night at Windsor
2 Acute disillusionment the only response to growing FAI debacle
3 Worst Sporting Moment: Mighty Nijinsky misses moment of triumph
4 Rugby to return in England with rucking but no hugging
5 Irish roots with the bit of Jo’burg dog: Curtis Campher has arrived
Real news has value SUBSCRIBE
Crossword Get access to over 6,000 interactive crosswords