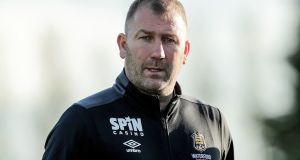 The FAI has confirmed the appointment of former Waterford manager, Alan Reynolds, to the technical staff of the Irish Under-21 side. Reynolds, who resigned his position at the RSC last month and has since taken up a role with Dundalk, will work alongside head coach Jim Crawford and former senior international team captain John O’Shea.

“Alan is a brilliant addition to the coaching staff and I’m delighted to have him on board as he will bring a wealth of experience to the position,” says Crawford.

“He has achieved fantastic success during his playing and coaching career, having managed at an early age, and achieved promotion with Waterford in 2017 and a fourth-placed finish the season after.

“Also, the apprenticeship he has served as an assistant is really important having worked with Stephen (Kenny) in the past. He has a great understanding of Stephen’s philosophy that we’re trying to bring in across the senior and Under-21 teams.”

Reynolds says he is “absolutely thrilled” to join the team set up. “I’ve kept an eye on the qualifying campaign and the development of the team over the past year, and it’s an exciting time for the team. It’s a really exciting group of young players which are coming through and we’re looking to keep the momentum for the remaining three matches of the campaign.

“It will be my first taste of international football, and there will be tough matches but I’m excited to get the chance to represent my country,” he added.

The team leads its European qualification campaign with 16 points from seven games, three more than Italy who have two matches in hand.

With the campaign having been suspended due to the coronavirus pandemic, the team will return to action on September 7th with a friendly in Slovenia after which Ireland will travel to Italy for a critically important match on October 13th, before wrapping up their group game schedule at home to Iceland then away to Luxembourg on November 12th and 17th respectively.

Reynolds, meanwhile, has been replaced at Waterford by former Republic international John Sheridan who will oversee the remainder of the club’s Premier Division campaign.