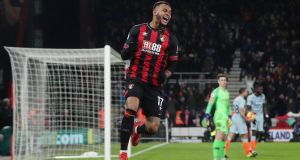 All it took to erode all the positivity whipped up by domestic cup successes was a trip to the south coast. Chelsea were humiliated by an excellent Bournemouth here, their defence lacerated and exposed by the pace and incision of their hosts’ counterattacks. Maurizio Sarri had already delivered a damning public condemnation of his players’ inadequacies after a loss at Arsenal earlier in the month yet this, in so many ways, was a display even more insipid.

Their lead from fifth place, which recently gaped at six points, has been whittled away, but the deficiencies in Chelsea’s game had always endangered that pursuit of the top four. Sarri’s team are three points and five goals worse off than Antonio Conte’s were at the same stage last year, and were beaten by the time Junior Stanislas skipped down the right and crossed for Josh King to ease a splendid finish into the top corner 15 minutes from time.

It was an excellent goal to confirm Bournemouth’s first win over a top-six side this term, and there would still be time for Charlie Daniels to guide in a fourth in stoppage time. Their own mid-season lull has been curtailed in spectacular fashion.

This contest had appeared to follow a familiar theme. Chelsea, with Pedro and Eden Hazard buzzing menacingly from flank to flank, had monopolised the ball and pinged their passes merrily deep in Bournemouth territory, but only ever occasionally threatened to open up disciplined opponents.

The header from a busy Mateo Kovacic, which was superbly turned on to the crossbar by Artur Boruc in the opening exchanges, had given a false impression. The Croatian had eked space unnoticed beyond the far post to guide that attempt goalwards, but the hosts did not often find themselves outnumbered.

They were content to watch Chelsea’s midfielders exchange their passes, waiting for them to over-elaborate or for imagination simply to drain from the play. Boruc would catch long-range attempts born of frustration from Hazard twice, Pedro and Cesar Azpilicueta.

How Callum Hudson-Odoi, cutting a glum figure next to a member of the visitors’ security staff just behind the dugouts, must have craved an opportunity to try and disrupt the hosts’ massed defensive ranks. The 18-year-old’s omission from the squad, his transfer request refused, had drawn the focus prior to kick-off. If his absence did not constitute punishment for that demand to leave, then it had provided the youngster with an instant reminder that forcing involvement from either Pedro or Willian will be an onerous task.

In truth it was Bournemouth who had actually carved out the more presentable chances, invariably on the counter following the breakdown of their latest elaborate passing exchange. David Brooks, so pesky in his role just behind King, was thwarted by Emerson’s smart challenge, then twice by Kepa Arrizabalaga. When Brooks joined his forward and Junior Stanislas in a gallop upfield just before the interval, the Spanish goalkeeper was grateful Stanislas’s shot was spat straight into his midriff.

Those chances had served as warnings, but Chelsea never seemed to learn their lesson. Brooks, so impressive in his first season at this level since that summer transfer from Sheffield United, was again free in the opening exchanges of the second half to collect Ryan Fraser’s cleverly clipped pass into the penalty area. The Welshman carefully and precisely placed his pull-back between panicked visiting defenders for King, running off his marker on to the pass, to slam his shot emphatically back beyond Arrizabalaga and in. That combination play would be revisited before the end.

The concession demanded a response, a demonstration that Sarri’s team can inject urgency and stretch resolute opponents once behind. Yet, even with Gonzalo Higuain leading their line, they had appeared to lack the punch capable of bursting through Bournemouth’s resistance.

Defenders swarmed all over the Argentinian whenever the ball threatened to reach him. When Pedro bypassed that situation with a lofted pass over the hosts’ back line, N’Golo Kante, in a position from where he has scored already this term, mis-controlled in front of goal.

Bournemouth would prove far more ruthless. Their counters had sliced opponents apart at will, so there was an inevitability to the extension of their lead. Brooks might have seen his break into Chelsea’s half choked by David Luiz only for the ball to cannon free to King, who liberated his team-mate with a sublimely weighted first-time pass into space. The youngster took his time once he had collected, cutting inside the befuddled Brazilian before easing home his side’s second of the night beyond the exposed Arrizabalaga. – Guardian