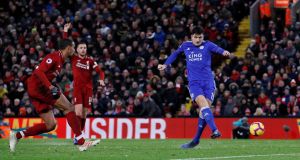 When the story comes to be told of the 2018-19 season, how vital will this game turn out to be?

Liverpool have moved five points clear of Manchester City and, for that reason alone, it has been a profitable 48 hours for Jürgen Klopp’s team. Yet there was no getting away from the fact this was a missed opportunity for the Premier League leaders, with the first tell-tale signs of nerves sweeping Anfield and perhaps getting in the minds of one or two players.

This is certainly no time to get stage fright, with 14 games still to go, and it was particularly surprising given that Sadio Mané, Liverpool’s most dangerous player, had given them the lead from the first noteworthy attack.

Liverpool were facing a team who had lost four of their last five games, but Leicester were tough, obdurate opponents who refused to be cowed and demonstrated a spirit of togetherness that made it feel perplexing Claude Puel finds his position questioned so frequently.

Liverpool, in turn, seemed to be feeling the pressure in a way that could not be said of any other time this season. It was rare, for example, to see Mohamed Salah so ineffective. It was not that Salah played badly, just that he did not get close to his most exhilarating levels. The same applied to the team as a whole and, though Liverpool extended their advantage at the top, the disappointment was palpable.

Liverpool certainly set off as though they had been given a lift by the result at St James’ Park the previous evening. There were only two minutes on the clock when Mané exchanged passes with Andy Robertson, took advantage of Harry Maguire missing the attempted clearance and conjured up the opening goal with a clever first touch and precise right-foot finish.

Not one player in blue had managed a clean touch of the ball before it ended up in Kasper Schmeichel’s net and, in those early exchanges, Liverpool looked like a team in hurry, keen to get the job done quickly.

Roberto Firmino come close to doubling the lead. Mané flashed a header wide, unchallenged from a corner, and in those moments Liverpool’s supporters could probably have been forgiven for expecting a more straightforward match.

Instead, Leicester began to grow in confidence – encouraged, perhaps, by the clear suspicion that Alisson might be in an unexpectedly obliging mood. One misplaced pass from the Liverpool goalkeeper went straight to James Maddison and the Leicester player certainly tried to make the most of a fleeting touch from Jordan Henderson as he broke into the penalty area.

Henderson, filling in at right back in the absence of Trent Alexander-Arnold, was given the benefit of the doubt for that one and there was another let-off for Liverpool when Alisson dithered with a clearance and Jamie Vardy charged down the ball. The ricochet ended up with Marc Albrighton and when he swung the cross back into the penalty area Maddison really ought to have done much better with a free header.

It was a spirited response from Leicester but Klopp was entitled to be disappointed by the manner in which his players were making life unnecessarily hard for themselves and the equaliser was the case in point.

Robertson has legitimate credentials to be recognised as the outstanding left back in the Premier League but he was guilty of conceding a needless free-kick to leave his team in a vulnerable position.

Klopp’s displeasure was clear on the touchline and, though Maddison’s initial delivery was turned away, Leicester had plenty of players forward. Virgil van Dijk, the Liverpool player closest to Maguire, had switched off and lost his man. Ben Chilwell returned the ball into the area and Maguire had the space and time to stroke his shot beyond Alisson.

Liverpool’s crowd had been calling for a red card earlier when Mané ran behind the Leicester defence only to be brought down by Maguire. The centre half escaped with a booking and, with the match level, the emphasis was back on Liverpool to soothe the crowd’s anxieties. Except Leicester could now sense the nervousness. The complexion of the game had changed drastically and, despite being on a poor run, Puel’s side had already shown this season they could raise their performance against the top sides.

At half-time a team of groundsmen were sent on to remove flecks of snow from the penalty area that Liverpool would be attacking. The other side was left as it was. Not that it seemed to make too much difference and it was Leicester with the first clear opportunity when another free-kick picked out Maguire. The offside flag stayed down and Firmino, of all people, intercepted the header a yard or two from his own goal.

After that, Liverpool had plenty of the ball and a decent penalty appeal when Ricardo Pereira trod on Naby Keïta’s foot but they could not find a way through and their night ended in frustration. – Guardian