Antonio Conte: ‘I’m not worried about my job’

Chelsea boss says he will not lose any sleep over the ongoing, and intense, speculation 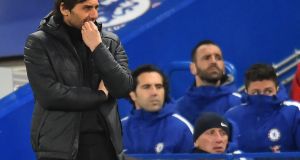 Antonio Conte insists that his Chelsea job is not under pressure. Photograph: Getty Images

Antonio Conte lamented a “very poor” Chelsea performance as they were humbled 4-1 at Watford but insists he still has no concerns over his future.

The Hornets were superb as they took advantage of Tiemoue Bakayoko’s red card to stun the Blues, who went into the game on the back of a home defeat at the hands of Bournemouth.

Troy Deeney’s penalty was all the separated the sides before Eden Hazard curled in a superb equaliser with eight minutes remaining.

But Watford, with manager Javi Gracia taking charge of his first game at Vicarage Road, rallied as Daryl Janmaat, Gerard Deulofeu and Roberto Pereyra all struck impressive goals to wrap up a convincing win for the hosts.

The defeat for Chelsea leaves Conte, who heading into the game had called on the Chelsea hierarchy to offer him a public show of support, in a more difficult position with his reigning champions now only one point clear of fifth-placed Tottenham.

“I have great disappointment, for sure. Our performance was very poor tonight.

“We started very badly and without personality. We played with fear. I think so. We are not used to playing this type of football.”

The Italian went on to say he would not lose any sleep over the ongoing, and intense, speculation regarding his future at the club.

“It’s very difficult because, every day and every press conference, you ask me if I’m worried. No. I’m not worried. Tomorrow is another day. I can be the Chelsea coach or not.

“I go to sleep without a problem that maybe, maybe, I could do this or that. I try to do everything. If it’s not good, the club can make a different decision. Life goes on.

“We can lose, but always we have to try to play football and to try to be positive. It’s right, everyone must take responsibility: me, the players.”

Gracia enjoyed a superb introduction to the Watford fans, having replaced Marco Silva as head coach a fortnight ago.

His side won their first Premier League game since St Stephen’s Day to move six points clear of the relegation zone and leave the former Malaga manager delighted.

“A great match, a great victory. We’ll try to do the same next time.

“I think it’s important not only for three points, but for the motivation, to believe in our possibilities and our work.”