Klopp expecting a hot reception for Van Dijk at Southampton 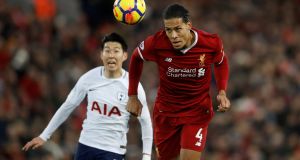 Jürgen Klopp believes the acrimonious nature of Virgil van Dijk’s departure from Southampton requires him to speak to the €85m defender before Sunday’s game at St Mary’s.

Van Dijk returns to his former club for the first time, six weeks after leaving to become Liverpool’s record signing and the most expensive defender in world football. Klopp, usually unconcerned at such reunions for his players, will make an exception for the Netherlands international owing to the immediacy and circumstances surrounding the transfer.

The 26-year-old submitted a transfer request and went public with his frustration at being denied a move to Anfield last summer, when Southampton reported Liverpool to the Premier League for an alleged illegal approach. Klopp admits Van Dijk must be mindful of the hostile reception that awaits him.

“For sure I will talk to Virgil about it,” the Liverpool manager said. “With other players I didn’t talk about it because I didn’t know or look at where they were coming from. But I will talk to him of course. We are all human beings. We are influenced by circumstances. It will not be a normal game – how can it be? It was a special story for him most of the time, really positive, and then not that positive at the end.

“We cannot make it too big and I don’t make it too big. Yes it is quite special but that’s all. We think much more about the football game and what we have to do and not about how we can avoid situations from outside because we don’t have influence. We have to accept it how it is – loud, not nice maybe, but still we have to play football.”

Van Dijk is the sixth player Liverpool have bought from Southampton in less than four years, for a combined €192m, and Klopp suggested the south-coast club may be happy with the income they have received from Anfield.

“I don’t think anyone at Southampton will say we’ve stolen him,” he said.

“It was a very public deal and the numbers, even if they are not 100 per cent, are okay so maybe they are really happy and they say: ‘Thank you for all the money we have now’. Or it could be the other way around. It’s not only the players we have.

“Since I’m here if you ask half the Premier League: ‘Where is he from?’ they say: ‘Southampton.’ Ox [Alex Oxlade-Chamberlain] is from there, although he took a different way, Theo Walcott. There are good players from this area. Maybe we should have a scouting department directly in Southampton?”