Jimmy Armfield obituary: From the pitch to the airwaves

Former England captain is marked for greatness by legacy as player, manager, broadcaster and ambassador 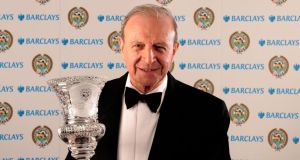 Few footballers can claim to have conquered quite so many aspects of the sport as Jimmy Armfield, the former England captain who is marked for greatness by his legacy as player, manager, broadcaster and ambassador for the game he loved.

Armfield’s imprint is a formidable one, a local boy and one-club man who spent 17 years at Blackpool, where he developed the blueprint for the modern overlapping right-back.

At international level he was Bobby Moore’s predecessor as Three Lions skipper, leading the nation at the 1962 World Cup and earning a winner’s medal for 1966 — albeit 43 years later, when Fifa belatedly recognised non-playing squad members.

By then ‘Gentleman Jim’ was three decades into his career as a journalist and summariser, a calling for which he showed unusual aptitude as he became one of the nation’s most respected and welcome radio personalities.

That anyone who managed a team in the European Cup final, as Armfield did with Leeds in 1975, should find that entry among their career footnotes seems unfeasible nowadays, but that stands as testament to Armfield’s remarkable body of work.

By his own estimation, though, one of Armfield’s most treasured performances came when he played the Wurlitzer at Blackpook Tower — which he did at a dinner dance, aged 80, in front of a handful of unwitting guests.

Born in Denton, Tameside, on September 21st, 1935, he grew up during the Second World War and emerged with a good education from Revoe Primary and Arnold School. The latter is due to reopen named the Armfield Academy, in his honour.

There was an offer to study economics at Liverpool University, where an entirely different world would have opened up in front of him.

Instead, the first chapter of his lifelong association with Blackpool began. Armfield was a self-styled “street footballer”, always kicking a ball on the roads or beach front. Yet he had never played on a proper pitch before being steered towards a Tangerines trial match by his PE teacher.

He seized the moment emphatically, scoring all his side’s goals in a 4-1 win, setting in motion a professional career which spanned all the way from 1954 to 1971.

Right full-back was his chosen position and the presence of the great Stanley Mathews on the same flank offered him an unusual opportunity for the era — bundles of space as opposition sides double-teamed the winger.

So he raced ahead, attacked the gaps and, initially at least, earned an earful from manager Joe Smith. Recalling an early outing against Wolves for the National Football Museum, he recalled Smith saying “If I wanted you to be a right-winger you’d have a number seven on your back, not a number two.”

The game quickly learned to love Armfield’s adventurousness, a skill that defines his latter day successors.

Armfield managed a record 627 appearances for Blackpool, though there was a conspicuous lack of silverware as his own pedigree often outstripped that of his hometown club.

Instead, he reached the heights in England colours. He debuted in the Maracana in 1959, was handed the armband by Walter Winterbottom and kept it under Alf Ramsey.

He led the nation to Chile in 1962, where he made the team of the tournament, but injury and the emergence of George Cohen led to his support role in the glorious home campaign four years later.

Moving into management on the advice of none other than Matt Busby, he spent four years at Bolton before replacing Brian Clough at Leeds. The highlight of four years at Elland Road was the European Cup final in Paris, though Armfield’s side were beaten 2-0 by Bayern Munich.

He never scaled those heights again but, though he did not return to the dugout after 1978, he was the Football Association’s de facto headhunter when they appointed Terry Venables and Glenn Hoddle as England boss.

By then he had already pivoted into another of football’s many avenues, starting with a writing job at the Daily Express, before the BBC offered some commentary shifts in 1979.

He went from part-time broadcaster to permanent fixture on the nation’s airwaves, a perfect platform for his geniality, enthusiasm and insight.

Few in his line are as universally liked and respected by those on the other end of the dial. The same was true within the game.

After being treated for non-hodgkin’s lymphoma of the throat in 2007, he returned to the work the following year for a match at Bolton. Waiting for him on arrival was a welcome back note, signed by Alex Ferguson and Bobby Charlton with the words “we have missed you”.

Wife Anne and son John, a lower league goalkeeper in his own playing days, are the ones who will miss him most now but their mourning will be shared far and wide in footballing circles.