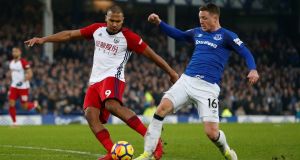 McCarthy – who only started his first Premier League game of the season on new Year’s Day after a year of injuries – got his right leg in between the ball and Rondon as the West Brom striker wound up to shoot, resulting in him coming through full force on the back of McCarthy’s leg, breaking his tibula and fibula.

Footage of the incident looks to show the Irish midfielder’s leg snap in half and Rondon was visibly distressed afterwards as he broke down in tears.

McCarthy was stretchered off and was consoled by Irish teammate Seamus Coleman who, incidentally, is nearing a return from a broken leg himself.

Everton manager Sam Allardyce described the incident as an “awful injury” in his post-match comments.

“In his brave effort to stop us conceding a goal, which he did stop, he unfortunately suffered a double fracture of his tibula and fibula, so that’s his season finished unfortunately,” Allardyce said.

“Having worked so hard on the injuries that have been plaguing him over the last 18 months and doing a lot of extra work with him to get him ready to come and play in the Premier League, because we all know what a good player, an effective player he is for Everton. He has had this good looking comeback in the last few weeks and then all of a sudden he gets this double fracture. So it’s a terrible blow for him. We wish him well, as does everybody.

“It’s a blow obviously for us and him but hopefully he will get better soon. It is (a sad dressing room). When you see the treatment that a player gets when he gets when injured now, the way forward for him is to get the correct surgeon to heal that leg and really wait until it heals and then fight your way back. When you have an injury like that it shows your mates just how much you love football, hopefully he will come back hungrier and better when he recovers.”

On Rondon, Allardyce was quick to make it clear that there was no blame attached to the Venezuelan who was inconsolable aftere the incident.

“There’s no blame attached to Saloman (Rondon), it was pure accident by the looks of it for me, I haven’t looked at it back but I saw it as a pure accident. I think the only good thing today for us was that we actually came out with a point.

West Brom manager Alan Pardew said everyone on the pitch was affected by the injury to McCarthy — particularly Rondon.

“Salomon was traumatised,” said Pardew. “He heard the break..... that affected him because he is that kind of person.

“I wasn’t sure he was going to carry on, but he got himself together and fair play to him, he was definitely the best player on the pitch today.”

Shortly after the incident Baye Oumar Niasse equalised for the Baggies to cancel out Jay Rodriguez’s early goal and rescue a point for the visitors.