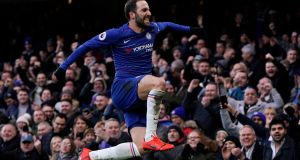 Chelsea’s Gonzalo Higuain celebrates after scoring against Huddersfield during the Premier League match at Stamford Bridge. Photograph: Will Oliver/EPA

Chelsea moved back into the top four as new signing Gonzalo Higuain’s first goals in English football helped them bounce back from their midweek drubbing to Bournemouth with a 5-0 win over Huddersfield.

The Argentina international smashed N’Golo Kante’s 16th-minute through-ball past goalkeeper Jonas Lossl before adding the fourth with 21 minutes to go.

In between Eden Hazard converted a penalty, awarded for Elias Kachunga’s nudge on Cesar Azpilicueta even though contact appeared to begin outside the box, with the Belgium international then skipping around Lossl to add his 15th of the season in the 66th minute.

Defender David Luiz headed in the fifth four minutes from time as bottom side Huddersfield, 13 points from safety, slipped to an 11th defeat in 12 league matches.

Inconsistency continues to dog Everton, with three wins and seven defeats in their last 12 league matches, after a 3-1 defeat which saw Wolves strengthen their grip on seventh place.

It was a first half to forget for Leighton Baines who conceded the seventh-minute penalty for a foul on Matt Doherty which Ruben Neves converted.

The left back, who sustained a rib injury in the midweek win at Huddersfield, was then forced off, resulting in right-sided defender Jonjoe Kenny having to stand in.

On-loan Barcelona midfielder Andre Gomes levelled things up with his maiden goal for the club, a long-range drive in the 27th minute, and his first league strike anywhere since April 2017.

However, a minute before the break Joao Moutinho’s free-kick was headed in by the unmarked Raul Jimenez as Marco Silva’s side conceded their 16th set-piece goal of the season and Leander Dendoncker’s 66th-minute volley finished things off.

Even the appearance of a black cat on the pitch, resulting in a long stoppage, failed to improve Everton’s luck.

Cardiff paid the perfect tribute to their missing striker Emiliano Sala with a 2-0 victory over Bournemouth on an emotional evening in the Welsh capital.

Bobby Reid’s double - a fifth-minute penalty and a clinical finish within 15 seconds of the second-half kick-off - gave Cardiff only a second win in nine league games on a night which was about a lot more than just football.

This was  Cardiff’s first home game since record signing Sala and pilot David Ibbotson went missing after the plane carrying them over the English Channel disappeared on January 21st, two days after the Argentinian striker had completed a move from French club Nantes.

Burnley’s first Premier League penalty in 68 matches saw them snatch a draw in added time at home to Southampton.

Jack Stephens handled the ball under pressure from deadline-day signing Peter Crouch, making his debut off the bench, and Ashley Barnes – who was booked for diving in the first half when felt he should have had a spot-kick – converted,

Southampton, who lost former Clarets striker Danny Ings to injury in the first half, had taken the lead 10 minutes into the second half when Nathan Redmond, after nine goals in 104 Saints appearances, fired home his sixth in 12 games since Ralph Hassenhüttl was appointed.

Crystal Palace moved seven clear of the bottom three with a 2-0 win over Fulham, who are now seven points from safety.

Luka Milivojevic’s 25th-minute penalty after Cyrus Christie’s handball gave them the lead with Jeffrey Schlupp converting the rebound from debutant Michy Batshuyai’s shot late in the second half.

1 Golf in Level 5 Covid restrictions: Clubs still waiting to hear if they can remain open
2 Hugo Keenan could start in changed Ireland team against Italy
3 Marcus Rashford is Man United’s hero in the Paris rain again
4 O’Neill steps into the unknown as Galway eye silverware
5 Here is your handy guide to sport on television this week
Real news has value SUBSCRIBE