Kevin De Bruyne centre-stage as his substitution changes a game

After City’s defeat to Newcastle, one wondered if one substitution could possibly have changed a season 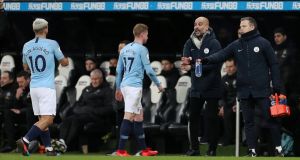 Kevin De Bruyne was not happy. Kevin De Bruyne walked slowly, yet urgently, from the St James’ Park pitch to take his seat in the Manchester City dugout with the ruddy-cheeked beseeching expression of a child who does not know what he has done wrong.

It was the 65th minute of City’s increasingly frantic Premier League game at Newcastle on Tuesday, and Pep Guardiola was doing what so many managers do: reducing risk.

De Bruyne had been booked in the first half and had just miss-timed a challenge on Matt Ritchie. Arguably there was a case for a second yellow card to be shown to the Belgian, and the home fans were howling for it. Loudly, steadily, the atmosphere inside the ground shifted, and City’s grip on play was loosening. They were still winning 1-0, but the match was becoming disordered. And if you are Guardiola, disorder is the enemy.

Manchester City’s manager had to consider the future. That is a grand concept, but also an immediate challenge. City had 25 minutes of a changing match to see out, but also four months of a four-pronged season – Premier League, Champions League, FA Cup, League Cup – to think about. City can still win them all.

De Bruyne has been injured. His season has been stop-start. He has played 16 times for City, but only once has lasted 90 minutes.

Last Saturday De Bruyne was at his decisive, artistic best against Burnley in the FA Cup and proclaimed: “I’m back!” And at Newcastle he was roaming creatively, passing short and long, those simple probes and complex pleasures he delivers.

His speed of thought even brought the initial yellow card that led to his substitution. De Bruyne was punished for taking a quick free-kick from which Sergio Aguero scored. Had it been allowed City would have been 2-0 ahead and the atmosphere inside St James’ would have been damp.

But it was disallowed, and as the game grew raucous Guardiola felt he had to protect his player, City’s narrow lead, and their season. So De Bruyne was called off.

He did not stride down the tunnel, as he had done when substituted against Burton Albion. De Bruyne says he is a bad loser – “even at home playing board games with the missus, the son, whatever” – and his face told a story of frustration. He is 27, the best midfielder in England, he knows what he means to City. Now he was watching.

A minute later Newcastle equalised. Some 15 minutes after that it was 2-1. City had lost control – of midfield, of the rhythm of the night, and of their capacity to pressurise Liverpool. Their key play-maker had been removed, they had ceded momentum, and Guardiola gave a terse “never” when asked if the opposition had been underestimated.

As City’s players, deflated, beaten, mooched through the foyer and then on to their private jet back to Manchester, it felt so significant a moment it was possible to wonder if one substitution can change a season.

In Manchester there will be United fans barking angrily at the temerity of the question. Soon it will be the 20th anniversary of Teddy Sheringham and Ole Gunnar Solskjaer replacing Jesper Blomqvist and Andy Cole in the Nou Camp.

De Bruyne’s withdrawal on Tuesday was hardly of that scale. But nor could it be dismissed as a detail. City had been winning when he was on the pitch; they left Newcastle with a rare sense of loss. Reduced risk had become increased risk.

This had been City’s opportunity to hustle Liverpool. It was the first time in six weeks that Guardiola’s team had played first. And it was gone.

Then on Wednesday, a reprieve. Liverpool’s ordinary draw with Leicester re-inflated City, and as the whistle blew at Anfield Guardiola’s substitution 24 hours earlier took on a different sheen. A potential red card for De Bruyne had been avoided, he had another hour of football in his legs, he can go again.

The special brilliance of De Bruyne means this matters. Against Arsenal on Sunday, City have another chance to reapply the pressure on Liverpool. De Bruyne can play and, fresh, he can propel City to victory. It is one that would cut Liverpool’s lead to two points before their match at West Ham on Monday night.

And next Wednesday City have a third opportunity. They are at Everton, while Liverpool have restless rest. Goodison Park, so close to Anfield, would be some venue to make a peppery statement of intent.

City and Liverpool both have flaws amid their qualities, and last week both endured a bout of summit fever. Anxiety will be a factor from here, so too sure-footed assurance.

De Bruyne does not appear to suffer from the former and most definitely possesses the latter. He has been a fringe presence in this Premier League season to date, and has just one goal. But he moved centre stage on Tuesday – for differing reasons – and over the next 3½ months you can see him staying there, urgent, spraying his beautiful influence across four City targets.

Even for those of us who regard the talents of Wilfried Zaha as exaggerated by Crystal Palace followers, it is possible to sympathise with the angular winger when he claims to receive a particular form of treatment from opposition defenders.

Zaha is not just the victim of cutting tackles, he suffers those little nudges and shirt-pulls which affect his movement. These do not cause referees to always blow their whistles though, even if they are a drag on fair play. Every Zaha performance is shaped by such man-handling and his fury is forgivable.

The latest example came at Southampton. James Ward-Prowse could only stop Zaha by pushing him over. Understandably Zaha was annoyed. Ward-Prowse then smirked at Zaha, and gave him a knowingly patronising consoling pat.

Ten minutes earlier Ward-Prowse had equalised Zaha’s opening goal and now Zaha reacted. There was a minor confrontation. The referee, Andre Marriner, seeing this, quickly forgot about the initial foul and focused on the reaction. He booked Zaha.

Why was Ward-Prowse not cautioned? He had forced Zaha to the ground when the forward was threatening to go past him.

Infuriated – understandably – at this omission and at his own yellow card, Zaha offered sarcastic applause. For this dissent he was shown a second yellow card and was sent off.

We could label Marriner a pedant, but a pedant would have booked Ward-Prowse for the original foul. No, the official was officious.

Then afterwards Zaha was lectured for his response when his response was natural. He knew there had been a sporting injustice. Yet he was forced to come out and mouth platitudes about learning from mistakes.

We are yet to hear from Marriner.