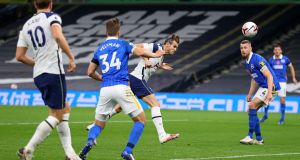 It was not quite up there with the time Gareth Bale came off the bench to put Real Madrid on the path to Champions League glory with that overhead kick against Liverpool in 2018. Yet it was still a precious moment for the Welshman. Thrown on in the 70th minute and told to puncture Brighton’s resilience, Bale produced the decisive moment three minutes later, leaping to score for the first time since returning to Tottenham.

The beaming smile on Bale’s face spoke volumes. After the breakdown in his relationship with Madrid, he was home at last: back in Tottenham’s colours and providing moments of class when his team needed him. Tottenham had laboured. They had given up another lead and were heading for another home draw. In the end, though, a substitute lifted them to second place, two points behind Liverpool and dreaming of a title challenge.

This was a big win for Spurs, whose stand-ins had underwhelmed during an insipid defeat to Antwerp in the Europa League. The regulars returned and for 15 minutes Mourinho’s side threatened to blow Brighton away, working as a cohesive unit, hunting in packs before launching a series of dangerous raids.

The main threat came down the left, where Tanguy Ndombele and Sergio Reguilón helped Son Heung-min inconvenience Tariq Lamptey. A smart interchange in the sixth minute ended with Reguilón testing Robert Sánchez, a 22-year-old Spaniard handed his first Premier League start in goal for Brighton after replacing Mat Ryan, and it did not take long for the visitors to crack.

It came from another burst down the left, Son released by a chip from Pierre Emile-Hojbjerg. Son spun on the byline and although his cross was bundled away, Graham Scott blew his whistle when Adam Lallana barged into Harry Kane on the edge of the area.

Tottenham’s captain had welcomed the contact and Brighton’s hearts sank once a VAR review revealed that the foul had taken place on the 18-yard line. Scott had no option but to point to the spot and Kane stepped up to send Sánchez the wrong way.

A walloping appeared to be on the cards. Instead, Brighton started to play. Lamptey began to see more of the ball, surging forward from right-back, earning praise from his teammates as he forced Reguilón to drop deeper.

Brighton were an intriguing proposition: well drilled, technically proficient, tactically flexible. But for a while it seemed that Tottenham would be able to keep them at arm’s length, especially as Leandro Trossard was stationed on his own up front due to the absence of Neal Maupay.

Yet there were warnings for Mourinho’s players. Midway through the first half Ben White, catching the eye in midfield for Brighton after moving out of central defence, slid a clever pass into the area and Trossard tumbled after being tugged by Matt Doherty. Graham Potter, whose side have won once in seven games, was amazed that Brighton were not given a penalty after another review.

Brighton refused to become downhearted. The equaliser came when Pascal Gross released Lamptey, who rolled a deft finish beyond Hugo Lloris. This time the technology worked in Brighton’s favour. Scott looked at the pitchside monitor and decided that Solly March had not fouled Hojbjerg in the build-up.

Tottenham stirred. Erik Lamela hit the post from 25 yards and Sánchez, on loan at Rochdale last season, somehow stopped Joël Veltman from scoring an own-goal after the rebound bounced off the Brighton centre-back. Then Kane managed to hit the post from close range.

Mourinho had seen enough, bringing Bale on for Lamela. After 73 minutes Bale delivered, heading in a cross from another Madrid old boy, Reguilon.