Newcastle back in quarter-finals for first time in 14 years 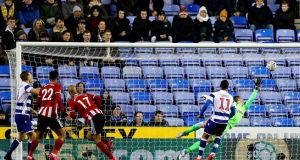 Billy Sharp was the hero for Sheffield United as the veteran striker grabbed an extra-time winner at Championship side Reading.

Neither side could find a winner in normal time but substitute Sharp headed into the roof of the net just before the end of the first period of extra time to send the Blades into the last eight.

Miguel Almiron’s double helped inspire Newcastle to a 3-2 victory at West Brom as the Magpies reached the FA Cup quarter-finals for the first time in 14 years.

The forward’s brace ended the Magpies’ month-long goal drought before Valentino Lazaro added a third after the break.

The impressive Allan Saint-Maximin also hit the post for the Magpies who dominated the Baggies, who lead the Championship.

It was closer than Steve Bruce would have liked though after Matt Phillips and Kenneth Zohore scored in the final 16 minutes but Albion must now focus on ending their two-year Premier League exile.

1 CVC cuts Six Nations offer by half to €165m as talks continue on new deal
2 Game Changers: Living beyond fear puts Alex Honnold above all others
3 Jack Charlton era made GAA sit up and realise its greatest strength
4 Game Changers: Gary O’Toole took a stand when others turned their heads
5 Georgia and Fiji in line to join Six Nations sides in eight-team tournament
Real news has value SUBSCRIBE