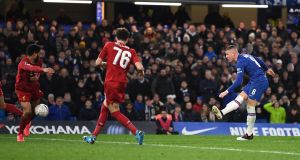 If Chelsea needed this, then Ross Barkley certainly did. And the boyhood Evertonian could hardly have chosen better opponents to punish. The midfielder’s Chelsea career since his move from Goodison Park in January 2018 can be best described as stop-start.

Nobody doubts Barkley’s ability when it is his day. It is just that those days have been too scarce. Everything came together for him here in a performance of touch and influence and the goal that he scored to smooth Chelsea’s passage into the FA Cup quarter-finals was the defining moment.

Seizing upon a loose ball 10 yards inside his own half, he sprinted away from the Liverpool midfielder Fabinho and, when he reached the edge of the area, with Joe Gomez backing off, he unfurled a venomous drive that ripped past Adrián.

Chelsea’s form has been poor since late November and they entered this tie having won only one of their previous six in the Premier League – and that is not to mention the Champions League hammering against Bayern Munich. This was better from them, a keeping alive of their final realistic shot at silverware but, from a Liverpool point of view, it was another strangely off-colour performance to follow that in Saturday’s shock 3-0 league defeat at Watford.

The pre-match talk had taken in the need to show a reaction to what had happened against Watford. Instead they slipped to a third away defeat in a row – the first was not necessarily terminal, the 1-0 against Atletico Madrid in the Champions League – and it was an evening when they could get little going in the final third.

The tone was set when Adrián allowed a Willian shot to slip through his fingers – a horrible mistake – and, although Kepa Arrizabalaga, who was restored by Frank Lampard to the Chelsea team, made fine saves, Liverpool lacked their usual fluency. Chelsea’s margin of victory could and should have been greater.

Klopp made the point beforehand that he had never been in a situation like this because he had never previously experienced the end of a 44-game unbeaten league run.

There was an element of the unknown in psychological terms. At the same time, he did not want to make it “bigger” than it was. “We lost a football game at Watford,” he said, simply.

This was the first time that Klopp had played in the FA Cup fifth round, his record in the competition having been decidedly patchy in his previous four attempts, and he went stronger than expected with his line-up. He prioritised experience over youth, although he did start the teenagers, Neco Williams and Curtis Jones, and there were a handful of his first-choice players.

Lampard gave an opportunity to Billy Gilmour at the base of his midfield three and the 18-year-old was busily effective – in fact the BBC made him man-of-the-match – but the stand-out piece of Chelsea team news was the recall of Arrizabalaga after a six-game absence.

Errors were the theme of a frenetic opening, with Chelsea making two, first through Kurt Zouma and then Antonio Rüdiger from which Liverpool almost got in. On the second occasion, Arrizabalaga bailed out his team with a decent stop to keep out Sadio Mané. The visitors also flickered when Takumi Minamino released Mané only for him not to shoot when the opportunity was there.

The biggest slip, though, came at the other end and it was a grisly one from Adrián, who played in goal ahead of Allison. It followed a risky sequence of passes out from the back into the Chelsea press, with Joe Gomez playing Fabinho into trouble and the Liverpool midfielder losing the ball, although there still did not seem to be too much danger when Willian took aim from the edge of the area.

Seconds earlier, after a Pedro shot had deflected kindly, Willian put his laces through the ball and was denied by Adrián’s strong hands. It was an eye-catching save. But this time, although the shot was straight at him, curling only slightly, Adrián lost his concentration and fumbled it into the net.

Pedro and César Azpilicueta had earlier had chances for Chelsea and, after Adrián’s lapse, the spotlight picked out Arrizabalaga in the other goal. It has been a testing time for the Spaniard, with Euro 2020 three months away. How can he push his starting claims with his national team from the sidelines at Stamford Bridge?

Arrizabalaga needed a big performance and he stood tall before the interval. He made a triple save to deny Mané, Divock Origi and Jones, a celebration of bravery, positioning and reflexes, and there would be another to thwart Mané after a quicksilver burst from the forward.

The tempo was high and Chelsea suffered a casualty when Mateo Kovacic took a knock and went off on 42 minutes.

Perhaps his withdrawal was precautionary, with Jorginho banned for the next three matches and N’Golo Kanté injured. Kovacic did not appear to be in too much discomfort when he went off.

Lampard has had reason to bemoan his luck with injuries, with Andreas Christensen, Christian Pulisic, Callum Hudson-Odoi and Tammy Abraham also out, and the situation worsened when Willian was forced off early in the second half.

Chelsea pressed on and they thought they had the second when the substitute, Mason Mount, bent a free-kick that he had won himself over the wall only for it to catch the top of the crossbar.

Barkley brought the ruthlessness and Liverpool’s pain would have been more acute had Pedro not shot weakly at Adrián when one-on-one after a mix-up between Williams and Gomez or if the goalkeeper had not tipped a shot from Olivier Giroud against the crossbar. – Guardian