Phil Jones, Eric Bailly and Marouane Fellaini will all miss match while Matic a doubt 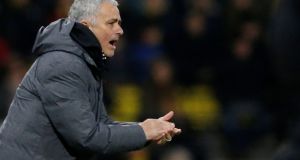 Phil Jones, Eric Bailly and Marouane Fellaini will miss Manchester United’s trip to Arsenal on Saturday due to injury.

Defenders Jones (thigh) and Bailly have each sat out the last four games, while Fellaini was absent for Tuesday’s 4-2 win at Watford.

United boss Jose Mourinho said at his press conference to preview the clash with the Gunners that none of the trio would be involved, and that Fellaini’s fellow midfielder Nemanja Matic was a doubt.

Mourinho said of the influential Matic, who came off in the second half at Vicarage Road because of what the manager has described as a muscular issue: “I hope he can (be involved), but I cannot guarantee.

“He is selected to go. Let’s see the feeling before the match, let’s see the warm-up. I hope he can. I want him to, he wants to, but I cannot guarantee.”

Jones has been out of action since limping off in the first half of England’s match against Germany on November 10th.

And Mourinho subsequently hit out at England’s treatment of the player, specifically that Jones had been given six painkilling injections in order to feature in a friendly.

On Thursday, England boss Gareth Southgate spoke about Jones, saying he had “massive empathy” for Mourinho, while also stressing he had “every trust in our medical team that they make the right calls”.

Southgate added: “We have got ongoing dialogue over this situation.”

But when Mourinho was asked at the press conference on Friday if the England camp had explained more to him about the matter, he simply said “no”, and gave the same response when then asked if they had told him anything at all.