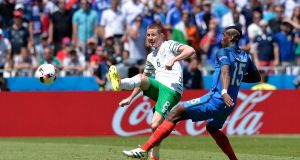 James McCarthy hasn’t made an appearance for Ireland since March 2017. Photo: Getty Images

Mick McCarthy is feeling positive about Ireland midfielder James McCarthy after he pulled on a Crystal Palace jersey for the first time on Monday in the under-23’s 1-1 draw with Birmingham City.

McCarthy made the switch from Everton to Roy Hodgson’s Palace on deadline day for €10 million and the midfielder could well feature in Ireland’s Euro 2020 qualifier with Switzerland on September 5th and the friendly against Bulgaria five days later.

McCarthy last made a first team appearance on April 21st when he came off the bench for Everton in their 4-0 win over Manchester United but it is hoped that his move to Palace will give him a new lease of life after recently being plagued with injuries, none more so than the broken leg which kept him out for over 10 months last year. The Glasgow-born player has not made an appearance for Ireland since the 2018 World Cup qualifying 0-0 draw with Wales in March of 2017.

McCarthy played a full 90 minutes for the Palace under-23s on Monday and was joined in the team by Dublin born goalkeeper Stephen Henderson as well as Irish under-19 midfielder Kian Flanagan who appeared as a late substitute.

“It was good just to see James out there for 90 minutes on a football pitch,” said the Ireland boss ahead of Friday’s squad announcement in Galway for next month’s matches.

“James has had a terrible time with injury so getting game time now is vital for him. What was important was that he played. I know one of the reasons James wanted to move from Everton was to get more football after playing so little last season following his injury.

“These are only baby steps for him but he is back now and looking forward to a new start with Palace. I sat beside Roy Hodgson for the game and I know from talking to Roy just how happy he is to have signed James for Palace.

“Roy is really looking forward to working with James at Palace and so am I with Ireland. I’ve kept in touch with James over the summer and look forward to seeing him back in the international squad.

“The fact that I got to see Stephen Henderson and young Kian Flanagan play as well was a bonus. I know Wayne, Stephen’s uncle, well so it was good to get a look at him while Kian has played for us at underage level and is only 20 later this month.”

Ireland manager McCarthy was at Bournemouth on Saturday as Sheffield United featured four of his players in their 1-1 draw after their promotion to the Premier League.

“I always thought Chris Wilder would stick with the players who got him promotion so I expected to see John Egan, Enda Stevens and David McGoldrick start,” added McCarthy.

“David was partnered by new signing Callum upfront and it was interesting to see them work together as a pair. I thought they were impressive together.”

Jeff Hendrick was on the bench for Burnley in their 3-0 home win against Southampton. Robbie Brady missed that match with a fractured rib that is expected to keep him out for another 10 days.

Harry Arter, now with Fulham, and Josh Cullen, back at Charlton, were both watched by Ireland scouts in the Championship at the weekend while assistant manager Terry Connor had another look at Birmingham City arrival Danny Crowley in their 1-1 draw at home to Bristol City. Callum O’Dowda was left out of the City squad for that game while James McClean missed Stoke’s defeat at Charlton due to a family bereavement.

McCarthy will travel to Kenilworth Road tonight to watch James Collins and Luton Town take on Alan Judge’s Ipswich in the Carabao Cup. “We’ve had James watched a couple of times already this season and I am looking forward to seeing him for myself,” said McCarthy.

“I also hope Alan plays for Ipswich. He was so good for us when he went on in the Denmark game and was really unlucky to break his wrist in the final move of the game. Alan had a great chance of starting against Gibraltar only for that injury so I’m delighted he is fit again.”